The Bold And The Beautiful Spoilers: Sally Makes It Difficult For Wyatt To Dump Her – Flo Ends Wally Again? 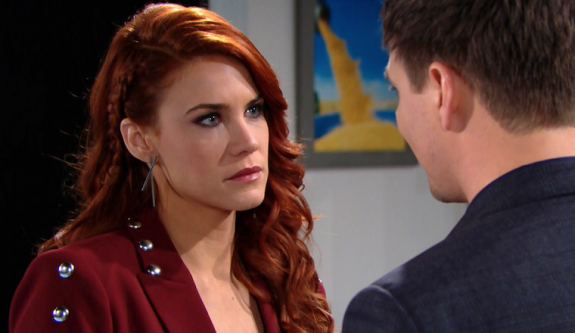 The Bold and the Beautiful (B&B) spoilers ease that Sally Spectra (Courtney Hope) will make it difficult for Wyatt Spencer (Darrin Brooks) to break up with her. It puts Wyatt in a tough spot as Flo Fulton (Katrina Bowden) professed her love for him.

Wyatt isn’t sure what to do because he loves both women. Flo is his first love but she did an awful thing to his brother, Liam Spencer (Scott Clifton) by helping Reese Buckingham (Wayne Brady) steal Beth and sell her to Steffy Forrester (Jacqueline MacInnes Wood).

The Bold and the Beautiful Spoilers: Eric Stuck In The Middle Of Quinn And Brooke’s Catfight

And Sally is different than any other woman he’s dated. She’s unique, authentic, and a breath of fresh air. So, when it comes time for Wyatt to have to decide between the women, it might be a tough choice for him.

Sally is in love with Wyatt and she refuses to let him break up with her. He is confused as he still has feelings for Flo too. B&B spoilers state that Sally will cry and tell Wyatt she loves him, and she isn’t going anywhere.

The whole exchange confuses Wyatt more as he isn’t sure which woman he wants to be with long-term. He thought he wanted to be with Sally, but after she moaned Liam’s name in bed, it has him questioning her feelings for him.

Wyatt decides to open up to Sally about his feelings and he lets her know he’s considering asking her to take a relationship break so he can sort out his feelings. The news is devastating to her, and she begs him not to leave her.

Bold And The Beautiful Spoilers: What Will Wyatt Spencer Do?

It’s a given he will end up in Flo Fulton’s bed again. The two shares so much history together and, if he can forgive her for the Beth ordeal, they could have a great life together. With that being said, Sally isn’t going to give Wyatt up easily. She will fight for him and give Flo a run for his money.

The question is, does Wyatt want to be with Sally or Flo? Don’t forget to come back later for more The Bold and the Beautiful (B&B) spoilers, news, and casting updates!