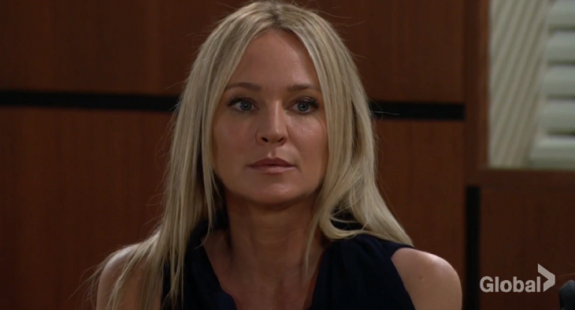 The Young and the Restless (Y&R) spoilers for Monday, January 13, tease that Chelsea Lawson (Melissa Claire Egan) and Adam Newman (Mark Grossman) will have breakfast with Connor Newman (Judah Mackey), who will have it all set up for them at the penthouse. Chelsea will then have to head to work, but Connor won’t want her to go because of the hostage situation from a while back.

Adam and Chelsea will quietly discuss how they should handle the situation, and Adam will say that perhaps Chelsea should quit working at the Grand Phoenix. Chelsea will say that she’d like to ask the therapist about it, and that she knows that together they can get through this.

Next on Y&R, Victoria Newman (Amelia Heinle) will be back from her trip to Singapore. She’ll tell Billy Abbott (Jason Thompson) that he needs a more challenging position when she finds out that his consulting job is over. Victoria will mention that she was hoping he could “sort things out” while she was gone, and he’ll wonder what that means.

‘The Young and the Restless’ Spoilers: Adam And Victor Demonstrate Restraint – Both Put Family First

Billy will reveal that he’s stopped seeing his therapist, and Victoria will immediately be concerned about that. Billy will say that he wants to live and not analyze his life. Victoria will note that she sees warning signs, and Billy will wish that she would stop trying to fix him. He’ll say that pretending to be who she wants is taking its toll on him, and that he’s reluctant to share things with her.

They’ll end up cuddling, and Billy will reassure her that everything will be ok. But privately, Billy will think that she views him as damaged goods. He’ll think that he’s not sure that the person she loves is him, or if he knows exactly who he is.

Young And The Restless Spoilers: Faith Newman Notices That Something’s Off With Sharon Newman

Next on Y&R, Sharon Newman (Sharon Case) will find herself distracted around Faith Newman (Alyvia Alyn Lind), who will go on about something then ask if Sharon’s listening. Sharon will end up snapping at Faith. She’ll apologize and they’ll hug. Faith will go up to the main house to meet Nick Newman (Joshua Morrow) and afterwards Sharon will leave for her biopsy.

Faith will end up calling Nick and asking him to come get her at the ranch. Later, she’ll tell Nick about Sharon snapping at her. Faith will try to call Sharon but will get voicemail. Faith and Nick will go shopping, and afterwards she’ll tell her father that if he needs to talk, she’s there, since she knows that break-ups can be difficult. Nick will wonder how she knows about breakups.

Sharon will head to the doctor for her biopsy, where she’ll undergo the procedure. She’ll tell herself to have a positive attitude. After the procedure, she’ll find a text from Rey Rosales (Jordi Vilasuso) and a voice mail from Faith on her phone.

Later, Sharon will get home as Faith and Nick are arriving. She’ll hide the biopsy paperwork as Nick and Faith talk. Faith will want to show Sharon what she bought when she and Nick were out shopping, but Sharon will say that she needs a nap. This will prompt Nick and Faith to wonder what’s going on.

Next on Y&R, Devon Hamilton (Bryton James) will talk with Elena Dawson (Brytni Sarpy). He’ll admit that he’s been having difficulty because of Amanda Sinclair’s (Mishael Morgan) resemblance to Hilary Hamilton (Mishael Morgan). He’ll attribute his fixation on Amanda to the feelings that she brought up about Hilary. Elena will be understanding and will say that it’s just human.

Elena will offer her help through all of this, and she’ll blame Colin Atkinson (Tristan Rogers) for everything that’s happened. Devon will reveal that Chance Chancellor’s (Donny Boaz) old law enforcement team managed to pick up Colin’s trail, but that the two of them are going to be fine no matter what.

Young And The Restless Spoilers: Does Amanda Sinclair Know Where Colin Atkinson Is?

Later, Devon will be at Society when Amanda arrives. Devon will invite her to sit down and that he has been finding reasons to confront her from time to time, and that it wasn’t just about Katherine Chancellor’s (Jeanne Cooper) will. He’ll explain that it was also about her resemblance to Hilary.

Amanda will think that none of this could be easy for Devon, and he’ll say that he hopes that they can peacefully co-exist. He’ll note that he can cope if she helped Colin, but he just wants to know how to find him. Finally, on Monday’s new episode of Y&R, Amanda will get ruffled and leave, and Devon will notice that she didn’t deny knowing where Colin was.