Bold and the Beautiful Spoilers: Steffy Makes Her Choice – Time’s Up For Hope 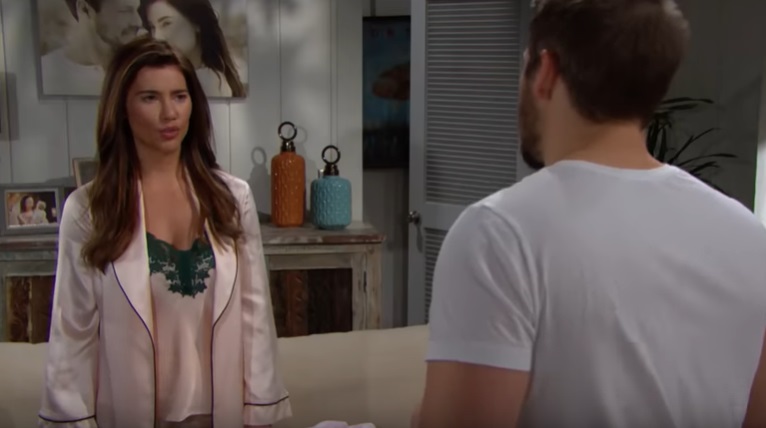 The Bold and the Beautiful spoilers tease that Steffy Forrester (Jacqueline MacInnes Wood) was alerted by her brother that Hope Logan (Annika Noelle) would soon be at the cliff house. But no dramatic physical fall resulted when she arrived. Instead, something vastly different happened.

Thomas Forrester (Matthew Atkinson) was trailing Hope, a skill he’s apparently developed through the years. He called Steffy, hands-free, told her where Hope was heading and strongly suggested that she take action. As expressed, Thomas phoned Steffy again, minutes later, which allowed Wood’s character to time a kiss with Liam that was observed by Hope.

Liam didn’t find paternity test results in Steffy’s purse this time. And Thomas was watching from afar, rather than being accidentally pushed off the cliff by Brooke Logan (Katherine Kelly Lang).

Kudos to B&B’s writing staff for crafting yet another scenario where this iconic setting could be employed to maximum effect. The results propelled the developing storyline significantly.

Liam gives Hope a proposal AND an ultimatum. 💍 Don’t miss it this week on #BoldandBeautiful. pic.twitter.com/s73w1YjOkY

Bold And The Beautiful Spoilers – Hope Logan Runs Out Of Time

The problem with Liam not proposing marriage for months is that it allowed Thomas time to regain personal and business connections with Hope. It’s arguable that Hope wouldn’t have agreed to become Douglas Forrester’s (Henry Joseph Samiri) legal co-parent and allowed Thomas to be Hope For The Future’s designer if Liam had remarried her immediately after Beth Spencer (Madeline Valdez and River Davidson) was revealed as still alive.

After telling Liam that he’d put her in an impossible position, when conditioning his remarriage proposal, it appeared as though time was needed to allow Lope to hash out their differences. But that needed element was pulled off the table when Hope happened upon Steffy kissing Liam, which he didn’t recoil from.

Bold And The Beautiful Spoilers – Steffy Forrester Goes For It

Thomas’ unexpected call forced Steffy to make an impulse choice. It’s likely one she won’t regret. What’s also clear is that she’s been honest about wanting to reconcile with Liam, but didn’t know if, or how that could happen.

Despite her brother’s selfish intentions, Steffy can choose to believe that he’s right about a Steam reunion being best. Thomas’ implied desire to be with Hope will now also be tested and possibly even considered by the lady whose personal life is once again in flux.