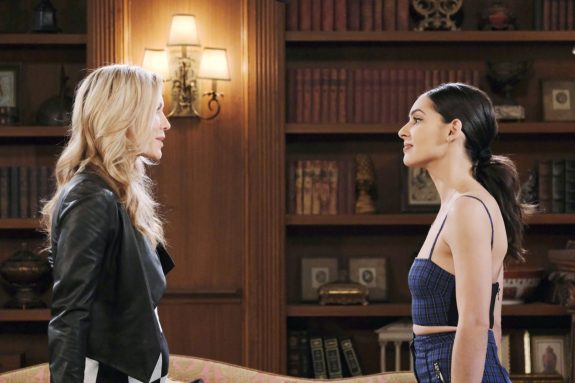 Days of Our Lives (DOOL) spoilers for Tuesday, January 14, tease that Abigail DiMera (Kate Mansi) will confront “Steve Johnson” aka Stefano DiMera (Stephen Nichols). After finding “Steve” in Kristen DiMera’s (Stacy Haiduk) room, Abigail will expect an explanation. She won’t see what business “Steve” would have with Kristen, so he’ll have to come up with a reasonable excuse.

That shouldn’t be too hard since “Steve” had an excuse for Kristen when he first showed up. “Steve” acted like he wanted information from Kristen that could lead him to Stefano, so that may be what he tells Abigail on Tuesday. Days spoilers say Abigail will continue to battle suspicions, but she may choose to put them aside for now.

In the meantime, DOOL fans can expect a shocking proposal. Eli Grant (Lamon Archey) will pop the question to Gabi Hernandez (Camila Banus), so she’ll be absolutely floored. Across town, Lani Price (Sal Stowers) will get down to the nitty-gritty of what Gabi did. She’ll spill all the pacemaker plot details and assure JJ that Julie Williams’ (Susan Seaforth Hayes) life could still be in danger.

JJ will eventually make his way over to the DiMera mansion. He’ll realize Eli’s just proposed, so he’ll argue that Eli can’t marry Gabi. JJ will insist that Lani still loves Eli with all her heart, so Gabi won’t be pleased about this interruption. However, the real reason for this visit will be JJ’s sneaky plan to disable the pacemaker app!

Days Of Our Lives Spoilers: Kate Roberts Will Get Grilled By Chad DiMera

Other Days of Our Lives spoilers say Kate Roberts (Lauren Koslow) will get grilled by Chad DiMera (Billy Flynn). It looks like Kate may put up a fight when it comes to signing over Andre DiMera’s (Thaao Penghlis) shares. Abigail warned that might be a sign of Kate’s agenda, so Chad may pester Kate about how much she really knows and what she’s up to.