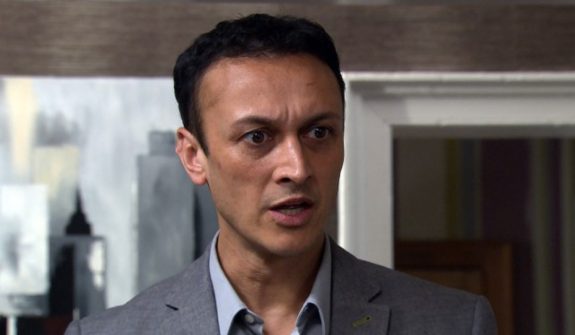 Emmerdale spoilers for the week of January 13 reveal Graham Foster (Andrew Scarborough) gets a warning. Jai Sharma (Chris Bisson) faces temptation and Rhona Goskirk (Zoe Henry) goes into a fury over a missing passport. Find out what else to expect when new episodes of the soap opera air on ITV.

It is teased that Graham gets a warning that it is known he has been messing around with the accounts. However, Graham has something to bargain with and hopes he can make a deal.

Monday’s episode will also feature Aaron Dingle (Danny Miller) being pushed to the brink and Jai is feeling pressured.

On Tuesday, expect to see Victoria Barton (Isabel Hodgins) and Liv Flaherty (Isobel Steele) barge in on Aaron with a hook-up. He ends up having a verbal outburst at both of them. Aaron won’t be the only one to deal with life in unhealthy ways.

Jai is stressed out at work and things get out of control. He attempts to do damage control, but it might all be too much.

As for Cain Dingle (Jeff Hordley), he will be surprised when Moira Dingle (Natalie J. Robb) comes to say farewell.

Emmerdale spoilers for Wednesday reveal Aaron will attempt to make amends to Liv. She tells him that he should say he’s sorry to Victoria too. However, he is apprehensive about it and doesn’t make any promises.

Then, Andrea Tate (Anna Nightingale) is thrown for a loop when Kim Tate (Claire King) offers her a bribe. All she has to do is move away. Will she take the bait?

On Thursday, fans can expect to see Jai hide cocaine in his desk drawer. However, he ends up becoming tempted later on. Will he give in to his addiction or fight it?

As for Rhona, she will make a discovery, but also is panicked when she can’t find a passport. She accuses Marlon Dingle (Mark Charnock) of making it disappear. Also, Jamie Tate (Toby-Alexander Smith) has to face the truth and Jai begins to crumble.

Rhona tells Vanessa Woodfield (Michelle Hardwick) the truth about relocating to France with Graham. She begs her not to say anything to Marlon.

Elsewhere, Kim is troubled by some news.