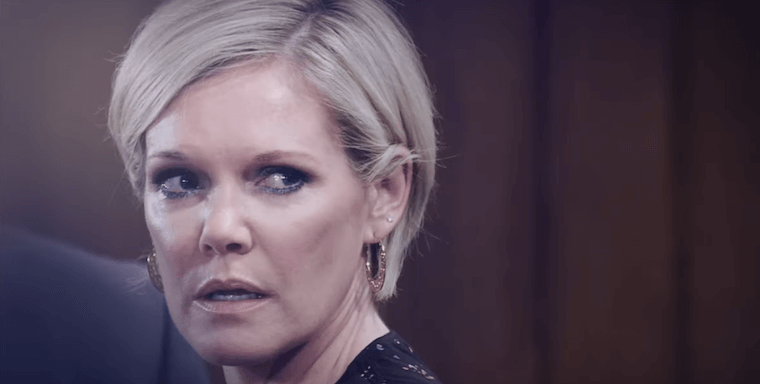 General Hospital spoilers tease that Sonny Corinthos (Maurice Benard) threatened Ava Jerome and she didn’t even know it – did she forget that Spencer Cassadine (Nicolas Bechtel) is his nephew?

GH Spoilers: Ava Jerome Was On Her Way Out Of Charlie’s Pub When Sonny Corinthos Was On His Way In

General Hospital viewers will recall the day after her wedding to Nikolas Cassadine (Marcus Coloma) when Ava went to Charlie’s Pub to tell her brother Julian Jerome (William DeVry) that she had gotten married to Nikolas the night before, and it wasn’t for love, it was for revenge. Julian just kind of shook his head, what else could he do? Ava and her schemes! Besides, Julian was preoccupied about his son Lucas Jones (Ryan Carnes) being in a coma and about his grandson Wiley Cooper-Jones (Erik and Theodore Olson).

As she was leaving she ran into Sonny on his way to talk to Julian outside. She told Sonny too about her marriage to Nikolas and that it was about revenge and power, which is a game she knows how to play, and that she intended to take Nikolas for every penny he got back from Valentin Cassadine (James Patrick Stuart) when he reclaimed the Cassadine fortune! Sonny just shook his head too, and warned her that if their daughter Avery Corinthos-Jerome (Ava and Grace Scarola) got hurt because of this marriage, or if Ava got murdered, Sonny would be very unhappy! It wasn’t that Sonny was concerned that Nikolas might murder Ava, he was talking about himself murdering Ava!

Ava obviously doesn’t realize how connected Sonny is to Nikolas and his family. Did she forget that Nikolas’ son Spencer is Sonny’s nephew and he doesn’t want Spencer disinherited on account of Ava? Sonny takes care of his family, and got his men overseas watching out for Spencer the moment he heard Nikolas was back to take his inheritance back from Valentin! Longtime General Hospital viewers will recall that Luke Spencer (Anthony Geary) and Sonny Corinthos (Maurice Benard) became close friends way back in the days of Frank Smith, (Joe Cortese) who ran the mob territory before Sonny came in and took over, and as a result of Sonny’s friendship with Luke, he also became good friends with Laura Spencer, now Laura Collins (Genie Francis).

Sonny was the one who rescued Spencer when Valentin tried to make off with him several years ago and almost succeeded, had Sonny not been there to stop him! Nikolas married Sonny’s little sister, Courtney (Alicia Leigh Willis) Spencer’s mother so there is another family connection between Sonny and Nikolas.

Yes, Avery would be hurt if Ava were to be murdered but Sonny’s warning just flew right over Ava’s head because she was too concerned about all that Cassadine money she is line for. Nikolas is no fool, however. Remember he found Ava’s gun when she was asleep and let her know in no uncertain terms he found it by pointing it at her?