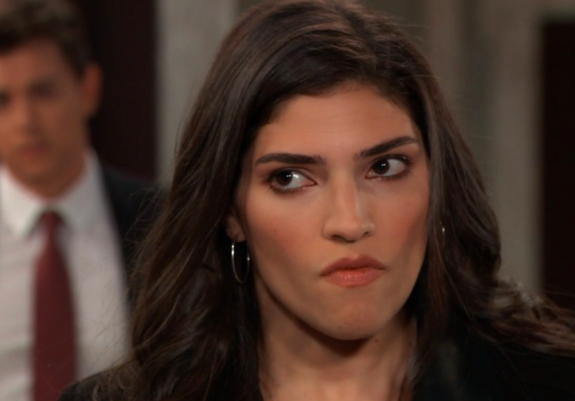 Ned Aston (Wally Kurth) and Michael Corinthos (Chad Duell) want to know if Brook is coming to the shareholder’s meeting. Brook has changed her name to Brook Lynn Quartermaine. Tracy asks what Brook’s angle is. Brook claims to just want to be close to her great grandparents. Michael asks if this has anything to do with the gig she booked at the Floating Rib. Brook calls Michael a narc.

Brook thinks changing her name will get her out of the contract. Michael explains that her strategy won’t work and Ned agrees. Michael leaves to go to Shiloh Archer’s (Coby Ryan McLaughlin) memorial service. Tracy thinks Michael should go to the meeting instead. Michael meets with Jason and tells him he thinks Tracy is trying to take over ELQ. Ned accuses Tracy of trying to take over the company, she says someone else is.

General Hospital’s Sam McCall (Kelly Monaco) calls Jason Morgan (Steve Burton) and wants to meet at the Metrocourt. Alexis Davis (Nancy Lee Grahn) demands to know what Sam is doing. Sam says hopefully they won’t have to be discrete for long. Sam tells Alexis about the deal with Robert. Sam tells Alexis she can’t give her specifics. Neil Byrne (Joe Flanigan) interrupts them.

Alexis welcomes Neil home and asks if he just dropped by to say high. Alexis and Neil catch up. Alexis tells Neil she forgot to thank him for saving her life. Alexis missed him. Alexis wants Neil to tell her what is going on. Neil tells Alexis something happened while he was away. Neil tells Alexis he is losing his medical license because of her.

General Hospital’s Liz Baldwin (Rebecca Herbst) and Franco Baldwin (Roger Howarth) are having dinner. Jason approaches their table. Liz talks to Jason about Jake Webber (Hudson West). Liz tells Franco that Jason is the one who got Drew to change his mind. Franco sees Peter August (Wes Ramsey) and sings his praises.

Peter tries to get Franco to back down. Peter tells Liz and Franco to give them a date for dinner and he will be there. Franco questions what is up with Peter. Liz gives Franco a video that Drew made for him, Franco isn’t ready to look at it.

Spinelli explains to Maxie that Georgie is in the final running for a job close to Port Charles. Spinelli asks if Maxie is planning to leave Crimson. Sam arrives to speak to Spinelli. Maxie and Spinelli fill Sam in. Sam tells Spinelli they really need him there. Spinelli and Georgie go to check into their hotel room. Peter wants to get take out and go home.

General Hospital’s Robert Scorpio (Tristan Rogers) visits Anna to pick up a file. Robert asks if she is having second thoughts about Peter. Anna says Robert’s bias is showing. Anna says nobody knows why Peter was there. Anna admits to having questions about Peter just turning up.

Robert asks if Anna has come up with any evidence. Robert says Anna must have found something. Anna says she chose not to look too close. Robert doesn’t want Anna to go down with Peter when he goes down. Robert tells Anna to step back when Peter’s sins come back to bite him. Robert leaves and Anna looks at the papers again.

General Hospital’s Lulu Spencer (Emme Rylan) speaks to Dustin Phillips (Mark Lawson). Lulu apologizes to Dustin. Lulu is glad she hasn’t scared Dustin off. Lulu thinks things are about to calm down. Lulu hopes she and Dustin can spend more time together soon. Lulu wants Dustin to take her home with him. Lulu gets up to go outside to meet Dustin and Brook runs into her spilling a drink on her. Brook’s manager shows up at the Floating Rib and forbids her to sing. Brook’s manager goes after her and Dustin gets between them. Lulu is shocked that Brook and Dustin know each other.