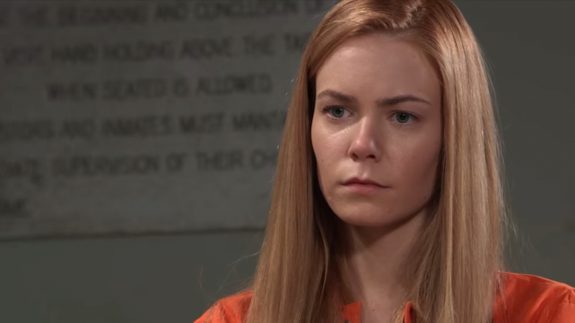 General Hospital (GH) spoilers for Tuesday, January 14, tease that Curtis Ashford (Donnell Turner) will seek some relationship advice. He’ll call someone to get some much-needed guidance, so this may tie in with the Bob Massicotte case. Jordan Ashford (Briana Nicole Henry) summoned a mysterious person to help her out since she doesn’t want Curtis too wrapped up in all this.

If Curtis gets brought in the loop, he may have some concerns – particularly since this mysterious person is a man that Jordan was quite close to in the past. It seems they may have been romantically involved, so that could leave Curtis with more worries eventually.

In the meantime, Ned Quartermaine (Wally Kurth) will face off with Tracy Quartermaine (Jane Elliot). They’ll spar over what Tracy feels really matters and how Ned needs to handle things. Tracy will also have a lesson for Ned that she thinks Brook Lynn Quartermaine (Amanda Setton) would do well to learn.

General Hospital Spoilers: Lulu Spencer May Be The Most Shocked When She Learns A New Truth

Lulu Spencer (Emme Rylan) may be the most shocked of all when she realizes these two have a history! It’ll only rev up Lulu’s rivalry with Brook Lynn even more. However, Brook Lynn will try to get her focus back as she takes the stage. She’ll plan to perform whether that manager of hers likes it or not, but we’ll see how things turn out.

Other General hospital spoilers say some Shiloh Archer (Coby Ryan McLaughlin) shockers are brewing. Willow Tait (Katelyn MacMullen) will ask a woman if she arranged Shiloh’s memorial service, but it appears the answer will be no. Nelle Benson (Chloe Lanier) is most likely the one behind Shiloh’s memorial since she’ll have a wild announcement to make.

In Tuesday’s GH episode, Nelle will make an astonishing confession. That may be regarding Nelle’s freedom and apparent marriage to Shiloh in prison. A fight will break out at this memorial service, which may be why Harrison Chase (Josh Swickard) gets caught in the conflict. He’ll wind up sending some PC residents to their corners, so be prepared for some hot drama.

General Hospital Rumors: Will Wiley Be The One To Blow The Secret That He Is Jonah? He’s Getting Old Enough To Start Talking! https://t.co/e2MMtHKQn3 pic.twitter.com/9wrIfq76Qr

GH Spoilers: Laura Webber Will Give Nikolas Cassadine A Bit Of A Pass

Next, Laura Webber (Genie Francis) will give Nikolas Cassadine (Marcus Coloma) a bit of a pass. She won’t excuse his actions entirely, but she will tell Jordan that she loves Nikolas no matter what he may have done. Nik is Laura’s son, so she can’t help but be grateful that he’s home and alive.