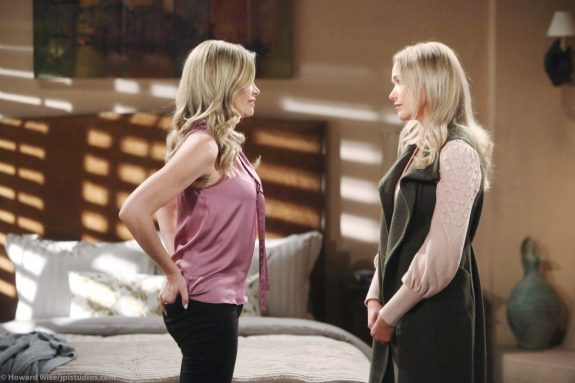 The Bold and the Beautiful spoilers for Tuesday, January 14, tease that Flo Fulton (Katrina Bowden) will be back on canvas. As B&B viewers know, Flo has been off recuperating from kidney surgery for several weeks now, ever since she made the decision to donate her kidney to Katie Logan (Heather Tom).

According to B&B spoilers, Flo will end up spending some time with her mother Shauna Fulton (Denise Richards), and as they talk, the topic of Wyatt Spencer (Darin Brooks) will come up. It’s been a while since Flo and Wyatt have seen each other, but the last time they visited, they had a good conversation and they seemed to be on decent terms.

Of course, B&B viewers will remember that Wyatt broke up with Flo after it was revealed the she was part of Reese Buckingham’s (Wayne Brady) baby swap and adoption scam. Honesty is very important to Wyatt, and he just couldn’t accept that Flo could have done something so awful.

B&B Spoilers: Shauna Fulton Urges Her Daughter To Fight For Her Man

Well, as Shauna and Flo talk about the situation, it seems that Shauna will realize just how in love Flo still is with Wyatt. The Bold and the Beautiful spoilers say that Shauna will encourage her daughter to fight for the man that she loves. Of course, it won’t be easy given that Wyatt is currently engaged to Sally Spectra (Courtney Hope), but Shauna will apparently be sure that Flo still has a fighting chance.

Meanwhile, on Tuesday’s new episode of B&B, Steffy Forrester (Jacqueline MacInnes Wood) will find herself frustrated. As B&B viewers know, she’s just been through a huge ordeal with Liam Spencer (Scott Clifton) and Hope Logan (Annika Noelle). She’ll probably welcome the chance to get back to work and get her mind on other things.

Unfortunately, Steffy will quickly find herself concerned when she puts eyes on Sally’s designs for the upcoming fashion showdown, in which she and Sally are competing against Hope and Thomas Forrester (Matthew Atkinson). It seems that the designs won’t be exactly what Steffy had in mind, as Sally won’t have made modifications according to Steffy’s specifications.

It looks like Steffy and Sally will clash over the designs, as Steffy will be disappointed in what she sees. The good news is that there should still be time for Sally to make changes and get back on track, but they’ve got stiff competition in Hope and Thomas, so they’d better get their act together!

Finally, Katie will have a special request for her family and friends. She’ll have something important to discuss with the people she loves the most, and she’ll ask them to gather for a meeting. Exactly who she gathers remains to be seen, but it looks like Flo and Wyatt will be invited, as well as Bill Spencer (Don Diamont) and Will Spencer (Finnegan George).

It will be interesting to see what Katie has in mind for the gathering, but ongoing B&B spoilers suggest that Katie will take everyone by surprise, and that she’ll end up begging her family and friends for forgiveness for some reason. It’s hard to imagine Katie needing to apologize for anything at this point, so we’ll see what that’s all about.