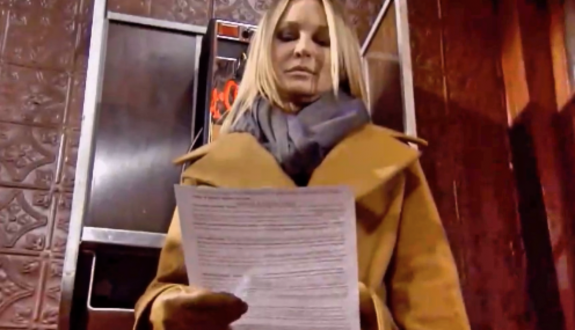 The Young and the Restless (Y&R) spoilers for Tuesday, January 14, tease that Mariah Copeland (Camryn Grimes) and Devon Hamilton (Bryton James) will catch up at Society. Mariah will share that she hasn’t yet talked with Tessa Porter (Cait Fairbanks) since she left on tour. They’ll discuss their relationships, and finally Devon will suggest that Mariah add some new clients to her roster to keep her busy while Tessa is away.

Meanwhile, Tanner Watts (Chase Coleman) and Tessa will be on a jet on their way to a tour destination. They’ll talk about the upcoming set list and he’ll be glad that she agreed to come on tour – he’ll like having her around. They’ll discuss how it’s easy to get lonely on tour and slip up, but Tessa will say that won’t happen to her. They’ll work together on a song, and later Mariah and Tessa will talk via phone.

Next on Y&R, at Crimson Lights, Lily Winters (Christel Khalil) will arrive with Jill Abbott (Jess Walton). They’ll talk with Sharon Newman (Sharon Case) for a bit and after Sharon leaves, they’ll chat about Colin Atkinson (Tristan Rogers), and during the course of their conversation, Lily will reveal that she’s begun dating again.

On the patio, Rey Rosales (Jordi Vilasuso) will talk with Sharon. He’ll suggest that they take a trip to Miami, but Sharon will want to talk with Nick Newman (Joshua Morrow) and Faith Newman (Alyvia Alyn Lind) first. Later, Sharon will check her phone but find no call from the doctor yet.

Next on Y&R, Victoria Newman (Amelia Heinle) will get a visit from Nikki Newman (Melody Thomas Scott) at Newman Enterprises. Talk will soon turn to Billy Abbott (Jason Thompson) and Victoria will worry about his mood swings and how he romanticizes his wild side. Victoria will explain how Billy has stopped therapy and she’ll note that it’s all very tiring for her. Victoria will express her concern about what else Billy might be hiding.

Meanwhile, at the Grand Phoenix, Amanda Sinclair (Mishael Morgan) will encounter Billy. They’ll talk about work, and she’ll reveal that she’s afraid that she won’t get hired in Genoa City because people are afraid of offending Devon. Billy will say that he can relate, as he knows what it’s like to be judged. They’ll talk a bit about his argument with Victoria, and Amanda will suggest that he talk with Victoria about what he’s feeling.

Next on Y&R, Lily will visit with Devon at his penthouse, and they’ll talk about all the goings-on in Devon’s life. They’ll talk about her dating, as well as the investigation into Colin. Lily will realize as they talk that Devon still suspects that Cane Ashby (Daniel Goddard) might be involved in the whole scam. Lily will worry about the consequences for Cane if he does turn out to be involved, but Devon will say he’ll show no mercy.

At Victoria and Billy’s home, Victoria will find a receipt for the little bar outside of Genoa City. Billy will then show up and Victoria will question him about it. He’ll say that he had drinks there with a client.

Finally, on Tuesday’s new episode of Y&R, Sharon will get a call from her doctor concerning her biopsy results. Rey will arrive home, and Sharon will say that there’s something that she needs to tell him.