Young And The Restless Spoilers: Victoria Confronts Billy About His Behavior 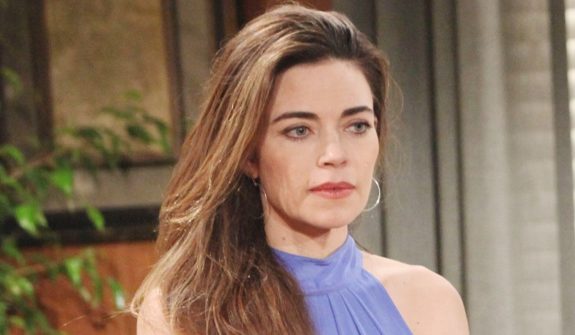 Victoria will find a receipt in one of Billy’s jacket pockets, and it’s from a bar in a part of town that he would never go to (as far as Victoria knows). The receipt is from the bar that Billy meets Amanda Sinclair (Mishael Morgan) in and she confronts him with the receipt, semi-casually asking him if he wants to tell her about it.

Young And The Restless Spoilers: Victoria Newman Takes The Receipt To Her Mother The Next Day To See What She Thinks

Victoria decides to talk to her mother about the receipt and Billy’s behavior as of late, since she knows Nikki Newman (Melody Thomas Scott) had some addiction problems in her youth. Victoria had already asked Billy previously if he was having any problems with his gambling, which is just one of the addictions he has had problems with in the past, and he denied it.

He told Victoria that he had quit going to therapy also, and that he felt he didn’t need it. That also upset her greatly. Nikki, naturally, is very concerned – not only because of the numerous times that Victoria had been hurt by Billy, but because of her own history she knows that this means he’s in trouble. Nikki asks her about the gambling and Victoria thinks there’s a deeper issue than backsliding into gambling.

The Young and The Restless Spoilers: Chance Discovers The Great Secret Of Hillary and Amanda https://t.co/mbyNv25ie2 pic.twitter.com/bhHhSKikLo

Y&R Spoilers: Victoria Newman Decides Just To Ask Billy Abbott To Be Honest With Her

Victoria decides to just ask Billy to be honest with her and lay his cards on the table – figuratively, of course. She wants to help, and that is one of the main problems. Billy doesn’t think he needs help or fixing and he just wants to be accepted the way he is, warts and all, and doesn’t want to have to be someone he’s not in order to live up to the expectations of others.

He is fine the way he is and he has just had a hard time coming to the realization that he doesn’t have to feel guilty or lie about having a friend (Amanda) who has been helping him figure himself out. Yet, if he talks to Victoria before he’s ready to about everything she’ll just wind up trying to fix him and he doesn’t need fixing – it’s just an aspect of his personality that no one except Amanda seems to understand is not a mental disorder or addiction. Eventually he will be able to explain this to Victoria, and he will just have to wait to see if she understands or accepts it or not.