Days Of Our Lives Spoilers: “Steve” Convinces John To Leave Town With Him To Hunt Down Stefano 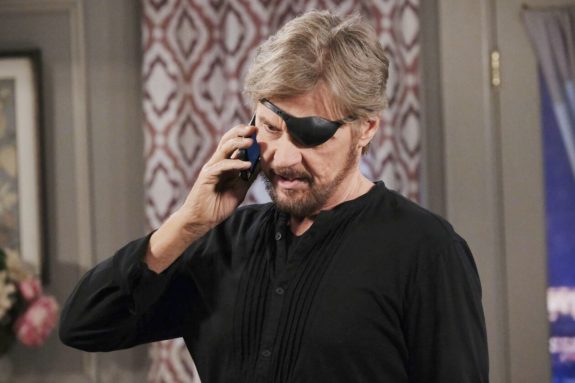 DOOL Spoilers: Stefano DiMera And Princess Gina Von Amberg Come Up With A New Plan So Each Would Get What They Want

Days of Our Lives viewers will recall that Stefano DiMera aka “Steve Johnson” and Princess Gina Von Amberg aka “Hope Brady” (Kristian Alfonso) had to come up with a new plan so that each of them would get what – and who – they want – Stefano, of course wanting Marlena Evans, (Deidre Hall) his “Queen of The Night” and Gina wanting John.

Their new plan is that each will have to die, but Stefano has a plan that will allow them to die, yet live. His exact plan has not yet been revealed, but this trip out of town with John must be part of it. “Steve” needs to leave Salem if for no other reason to get away from “his ex-wife” Kayla Brady (Mary Beth Evans) who has been driving him crazy with her following him, pining after him, and wanting answers that he cannot always give, and when he’s been making it up as he goes along, have caused suspicion that he’s not who he’s claiming to be, and he certainly doesn’t need that!

Days Of Our Lives Spoilers: John Black Has To Be Out Of The Way for Stefano DiMera To Have Marlena Evans

John Black has to be out of the way for Stefano to have Marlena, and one sure way to get him out of the way is to take him on a mission out of town, leaving Marlena in Salem! Gina won’t be happy but John won’t be right for Gina to take possession of unless he is back under Stefano’s control – in other words, “John Black” must die, and “The Pawn” must live!

Longtime Days of Our Lives viewers will recall that when John first came to town in 1985, he was an amnesiac who was recovering from extensive facial reconstruction surgery, called “The Pawn” and he was thought at first to be Roman Brady, (Josh Taylor) but later discovered to have been brainwashed into thinking he was Roman by Stefano, and he picked a name for himself, “John Black” off a war memorial. Later, he discovered he was really Forrest Alamain. This was during the time he became involved with Isabella Toscano (Staci Greason) when Marlena had disappeared, having been kidnapped by Orpheus (George DelHoyo) and presumed dead.

Brady Black (Eric Martsolf) was born during his time. Marlena eventually returned and they gave into their feelings after Isabella died, producing Belle Black (Martha Madison). In 1999, Stefano kidnapped John while he and Marlena were on their honeymoon, and brainwashed John into falling love with Hope, and sleeping with her. It can be assumed that Stefano is taking John out of town to again brainwash him into falling in love with Hope as Princess Gina, leaving Stefano free to pursue Marlena, who can be expected to also be kidnapped and brainwashed.