Eastenders Spoilers: Linda Fears She May Have Cheated On Mick 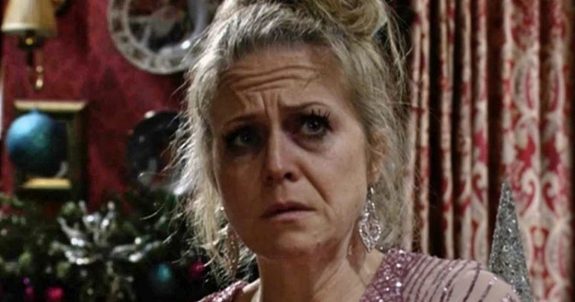 After Linda Carter woke up in a hotel room with a strange man, after a drunken New Year’s party, her problems with her family continue.

Mick (Danny Dyer) and Linda Carter (Kellie Bright) have been having a hard time for several months now, and it looks to continue into the New Year. This time it is directly having an effect on their son, Ollie.

Christmas and New Year were supposed to be a happy time in the Carter household, but it was anything but. Linda’s continuing battle with alcohol is one of the main problems. The fact that Linda didn’t return home on Christmas Day caused Mick to suffer a panic attack. Then, according to the Metro, Linda woke up in a hotel room with a strange man after celebrating New Year’s with way too much to drink. She is worried she may have cheated on her husband in the process.

However, those are not the only problems facing the Carters and relating to Linda’s drinking problem. Show-runners have talked about the storyline and how it could play out for the couple. Reportedly, Linda and Mick will be called into the principal’s office at Ollie’s school. It turns out the boy has been playing up recently at school and teachers believe his home life is the problem.

While the teacher believes his life at home is having an emotional effect on Ollie, Linda will not react well to this news. Her drinking is thought to be directly responsible for her son’s problems at school and the teachers have caught on to this. Now there are fears that social services could be called in to assess Ollie’s home life as well as Mick and Linda’s parenting skills.

According to show-runners, Mick will now have to make a major decision. The couple’s problems are already directly affecting his health. Add to that the problems with Ollie, and this can only add to his stress. Spoilers are asking whether Mick will finally decide to put his son ahead of his stormy relationship with his wife. Right now, he is trapped in a corner and something has to happen.

As for Linda, she has abused her husband for too long, often not realizing she was doing it under the affects of alcohol. With the New Year revelation that she may have cheated on Mick, will she be forced to make a decision to save her marriage?

Keep watching EastEnders to find out what happens to Linda, Mick and Ollie.