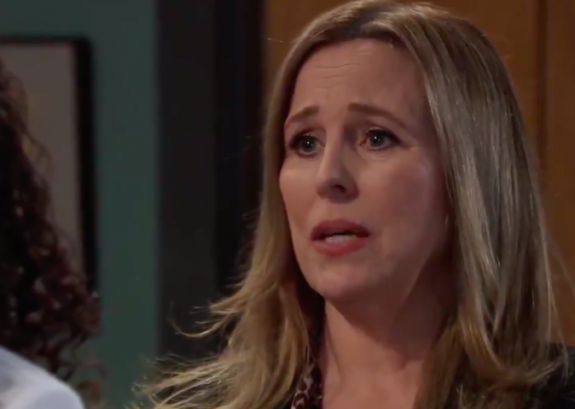 Michael asks Willow if she wants to back out of the service. Jason Morgan (Steve Burton) wants to find out who framed Sam McCall (Kelly Monaco). Harrison Chase (Josh Swickard) checks in with Jordan Ashford (Briana Nicole Henry) before the memorial. Jason arrives for the memorial as well. Chase gets called away. Willow goes to the memorial with Michael and Jason. Willow and Michael arrive with Jason.

Harmony Miller (Inga Cadrenal) joins them. The service begins with Daisy Kwan (Kelsey Wang). Daisy offers to let other’s speak. Willow volunteers to talk to the group. Willow explains what Shiloh Archer (Coby Ryan McLaughlin) was really like. Willow tells them they should be glad Shiloh is gone because they are free now. Nelle Benson (Chloe Lanier) reveals herself as Shiloh’s widow.

General Hospital Spoilers: Laura Webber Has Plans For the Waterfront

Luke got in trouble over so counterfeit items. Tracy wants Ned to talk over ELQ. Ned answers the door to find Laura there. Ned invites Laura in and talks about the waterfront renovation. Laura wants a compromise between Ned’s ideas and hers. Tracy agrees with Laura’s vision. Tracy mentions this will interfere with Sonny Corinthos’ (Maurice Benard) business. Ned tells Laura that Michael won’t back this because of Sonny’s business. Both Ned and Laura gets calls from the PCPD. Ned and Laura leave for the PCPD.

General Hospital’s Lulu Spencer (Emme Rylan) and Dustin Phillips (Mark Lawson) come to Brook Lynn Quartermaine’s (Amanda Setton) defense. Brook’s manager argues with her, as well as Dustin and Lulu. Lulu wants to call the cops. Brook plans to do her show. Lulu and Dustin advise Brook to sue for sexual harassment. Dustin and the agent fight, Lulu and Brook join in.

Brook hits Chase with a bottle. Chase wants an explanation. Chase ends up arresting them all. Jordan is stunned to see Chase come in with his prisoners. Chase yells at Brook for assaulting a police officer. Dustin apologizes for getting Lulu involved. Lulu asks how he knows Brook.

General Hospital’s Neil Byrne (Joe Flanigan) tells Alexis Davis (Nancy Lee Grahn) that he is losing his medical license because of her. Alexis doesn’t understand. Neil says because he admitted to having feelings for her. Neil was supposed to wait two years before dating a former patient. Neil thought they could keep it under wraps but someone found out. Somebody filed a complaint against Neil with the medical board. Neil plans to throw himself on the mercy of the board. Alexis plans to take the case, Neil wants to continue their relationship instead.

Neil thinks its time to try something new. Neil wants to see if there is something to explore between him and Alexis. Alexis is shocked he’s ready to kick his career aside for her. Alexis refuses to let Neil lose his career over their relationship. Alexis explains that she almost lost her law license. Alexis doesn’t want Neil’s career on her conscience. Neil doesn’t want to wait two years. Alexis can’t ask Neil to give up his career for her. Neil says they shouldn’t see each other until after the hearing. Neil walks away and says he wishes it could have been different.

General Hospital’s Curtis Ashford (Donnell Turner) calls Stella Henry (Vernee Watson) or advice. Curtis wishes Stella was in town, Stella steps out of the elevator. Curtis takes dinner to Jordan as the station since she stood him up. Curtis has Stella in tow. Curtis leaves Stella and Jordan to talk. Jordan tells Stella about her boss and how he died. Jordan wishes she had stayed in touch more.

Stella tells Jordan she has people who want to help her deal with this. Stella says obsessing won’t bring him back. Jordan has called for records to investigate this case. Curtis disagrees with her and explains what could have happened to her friend. Jordan needs to find real answers.