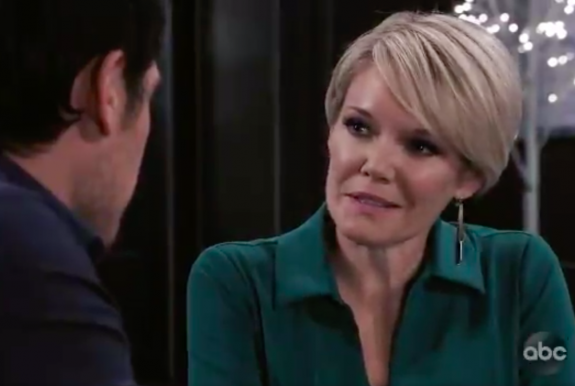 General Hospital (GH) spoilers for Wednesday, January 15, tease that Lulu Spencer (Emme Rylan) will be waiting for the full story. Once she’s settled in for a private moment with Dustin Phillips (Mark Lawson), Lulu will urge him to talk about his connection to Brook Lynn Quartermaine (Amanda Setton). She’ll insist that Dustin should start at the beginning and shouldn’t leave anything out!

GH Spoilers: Lulu Spencer Will Be Waiting For The Full Story

Dustin will bring Lulu up to speed on how he met Brook Lynn and how they apparently got together. He should also share what drove them apart, so Lulu should end up with a clearer picture soon. Even so, you can bet Lulu will deal with some worries about Brook Lynn pouncing on “Dusty” again!

Speaking of Brook Lynn, she’ll still be in police custody when she clashes with Ned Quartermaine (Wally Kurth). Brook Lynn will deflect blame and count on her dad to take care of this. She’ll shout that Ned should drop their family name and take her home.

Will Ned cut Brook Lynn some slack just this once or let her spend the night in jail? Tracy Quartermaine (Jane Elliot) suggested the latter, but we’ll see what Ned decides! Over with Ava Jerome (Maura West), she’ll talk to Nikolas Cassadine (Marcus Coloma) about their deal. Ava will remind Nik that he’s not getting what he wants until she gets what she wants.

General Hospital Spoilers: Nik Cassadine Has To Sign A Pre-Nup

Nik has to sign the post-nup and guarantee Ava’s demands will be fulfilled. Of course, Nikolas may push for the codicil first, but Ava will insist it doesn’t work that way. They’ll banter before Nik makes a seemingly deadly comment or two, but Ava won’t seem worried. She’ll refuse to believe Nikolas is going to kill her, but Nik will wonder what makes Ava so sure.

GH spoilers say some fun scenes are on the way, especially for those of you rooting for messy “Nava.” Across town, Sonny Corinthos (Maurice Benard) will get a visit from Stella Henry (Vernee Watson). He’ll offer the latest updates on Mike Corbin (Max Gail) and this new magnetic wave study that might help him.

Like Carly Corinthos (Laura Wright), Stella will express doubts about this. She’ll feel like Sonny’s still fighting a battle that he can’t win. Sonny will want to help Mike hold on, but Stella will wonder what Mike’s really holding onto. He can’t remember much these days and doesn’t have a very good quality of life. Mike spends most of his time in an agitated or panicky state.

Sonny will still struggle to let go of his dad, but maybe his upcoming road trip with Mike will help. As for Ava, she’ll also have a trip in mind on Wednesday. It sounds like Nikolas had better watch out since Ava’s still doing some scheming!

Nelle Benson (Chloe Lanier) is currently seeing the long-awaited results of her own twisted plot. She just revealed that Shiloh Archer (Coby Ryan McLaughlin) was her husband, which really shook up the memorial service. General Hospital spoilers say Nelle will show off her wedding ring on Wednesday and insist she’s indeed Mrs. Archer. She’ll be glad that all of her guests could come to this big event.

Nelle’s shocker will infuriate Michael Corinthos (Chad Duell), who’s bound to rip into Nelle the first chance he gets. Carly Corinthos (Laura Wright) will be just as furious once the news makes it back to her. Meanwhile, Willow Tait (Katelyn MacMullen) will be focused on “Wiley Cooper-Jones” (Erik and Theo Olson). She’ll fear that Nelle could go after “Wiley” and cause even more drama.