‘The Bold and the Beautiful’ Spoilers: Hope Must Move Forward – Relationship Drama Discarded 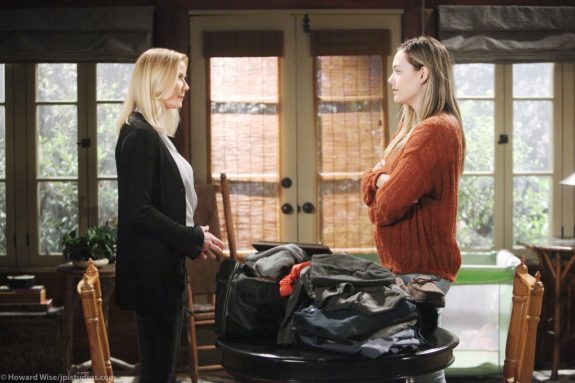 The Bold and the Beautiful spoilers tease that Hope Logan’s (Annika Noelle) decision to break up with Liam Spencer (Scott Clifton) is justifiable. After all they’ve been through, including past Lope verses Steam skirmishes, and, of course, the Beth Spencer (Madeline Valdez and River Davidson) tale, it was inconceivable that Liam would request remarriage one night and then witness him passionately kissing Steffy Forrester (Jacqueline MacInnes Wood) the next. Yet, incredibly, that’s what he did!

So, Hope kicked Liam out of the cabin and is planning on raising Beth alone. However, Liam’s stunned state will be followed by his attempted explanations, which will involve his perceived goal of salvaging their relationship.

Hope knew being with Liam also meant that Steffy was part of the package. She’s the mother of his first daughter, Kelly Spencer (Zoe Pennington and Allison Marcia Sweeney), and also one of the two loves of his life.

But Noelle’s character came to believe that she and Liam could revive what they once had. That outlook took hold after Phoebe Forrester (Madeline Valdez and River Davidson) was revealed as being Beth.

Steffy hasn’t sought another romantic relationship since telling Liam to return to Hope in the summer of 2018, but she has recently been asked out. Her rejection of a drink reinforced the limbo Wood’s character has chosen to live in, while also emphasizing her focus on being co-Chief Executive Officer at Forrester Creations.

If Steam is to revive and then maintain hold, Steffy will likely need to tell Liam that her brother manipulated the scene where Hope appeared to happen upon the now infamous kiss. Not telling Liam that critical detail would establish another Sword of Damocles, with Steffy being in peril of losing Steam due to her withholding Thomas Forrester’s (Matthew Atkinson) tip-off at any moment.

The Bold and the Beautiful’ Spoilers: Thomas Is Right – Steffy Must Take A Stand https://t.co/MyQXkZCgDb pic.twitter.com/B3EiksMXNe

Bold And The Beautiful Spoilers – Hope Logan Sorting Out Her Feelings

Regaining Beth was hard to grasp, as Lope’s daughter was believed to be dead. So, the miracle of her being revealed, through Douglas Forrester’s (Henry Joseph Samiri) courage, naturally led everyone to think that Lope was back for good, or at least for awhile.

Anyone would be flabbergasted when seeing their once and again intended spouse in a romantic shot. Plus it happened on the grounds of the home where Liam once lived with Steffy, reinforcing that Steam’s turf still exists.

Hope will need time to sort out her feelings. She might reconsider what Liam is doing, eventually. But B&B fans likely feel otherwise and they are right to.