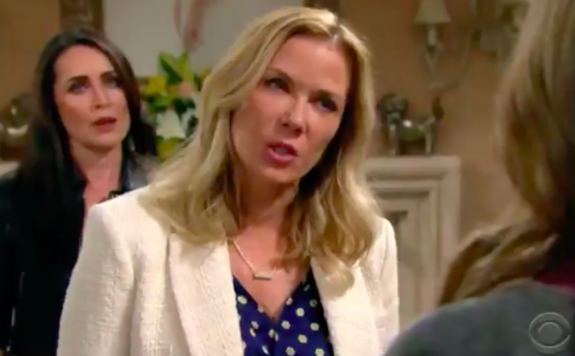 The Bold and the Beautiful spoilers for Wednesday, January 15, tease that things will get difficult for Ridge Forrester (Thorsten Kaye) when he finally admits to Brooke Forrester (Katherine Kelly Lang) that he and Shauna Fulton (Denise Richards) have been slightly more than just friends.

As B&B viewers know, Ridge and Shauna have become close in recent weeks, and they’ve gone from being friends and confidantes to sharing some kisses. Furthermore, Shauna has admitted to loving Ridge, and Ridge certainly hasn’t done anything to discourage her feelings toward him.

Well, on Wednesday’s B&B episode, it appears that Ridge will admit to Brooke that he and Shauna have kissed on several occasions, and Brooke will hit the roof. B&B viewers will remember that Brooke has warned Shauna about staying away from Ridge before, and on one visit to Flo Fulton’s (Katrina Bowden) apartment, Brooke slapped Shauna over the whole thing.

According to B&B spoilers, Brooke will be quite upset to hear that Shauna has made some moves on Ridge. Of course, Brooke’s in a weird position, since she willingly signed divorce papers with Ridge, and since she very recently turned down his invitation to reconcile. Brooke simply will not get back together with Ridge until he rids himself of his own son, Thomas Forrester (Matthew Atkinson).

Bold And The Beautiful Spoilers: Brooke Forrester Will Have Words For Shauna Fulton

But still, Brooke won’t be happy to learn that Ridge is living in the same mansion with Shauna, especially now that she knows that Shauna is after him romantically. And apparently, once Brooke learns about Ridge and Shauna’s kisses, all hell will break loose. Brooke will want to confront Shauna again, and when she does, B&B spoilers say that she’ll slap Shauna once again. It should be quite the scene.

Meanwhile, on Wednesday’s B&B episode, Wyatt Spencer (Darin Brooks) and Flo will catch up in the Forrester guest house. As B&B viewers know, Wyatt was chatting with his mom Quinn Forrester (Rena Sofer) in the main house, when Shauna appeared and mentioned to him that Flo was back and that she was alone in the guesthouse.

That led Wyatt straight to the guesthouse, where the two are now spending some time together. It looks like they will be thrilled to be in each other’s company again. It had been several weeks since Wyatt and Flo had seen each other, since Flo has been off reflecting on her life and doing a little soul-searching.

Of course, Flo went through a lot last year. She got caught up in Reese Buckingham’s (Wayne Brady) baby swap and adoption scam, which spiraled out of control and landed her in jail. She also found out that she was a Logan, then lost everything (including Wyatt) when the truth came out about Beth Spencer (River Davidson and Madeline Valdez).

But now, Flo and Wyatt will happily reconnect, even though Wyatt is technically engaged to Sally Spectra (Courtney Hope). That will probably be the elephant in the room as they talk and get reacquainted. The Bold and the Beautiful spoilers also say that both Wyatt and Flo will receive invitation to a family meeting put together by Katie Logan (Heather Tom), and they’ll decide to attend this event together.