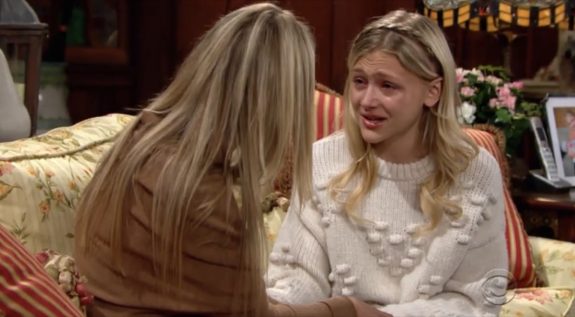 The Young and the Restless (Y&R) spoilers for Wednesday, January 15, tease that Sharon Newman (Sharon Case) will tell Rey Rosales (Jordi Vilasuso) that she can’t believe she’s saying it but that she has breast cancer. She’ll give him the details about finding the lump, having the tests, and talking to the doctor afterwards. Rey will finally understand why she’s seemed so distracted lately.

Sharon will say that she doesn’t want anyone else to know about the diagnosis right now, and Rey will say that he wants to go to her next appointment with her. Rey will comfort her as she considers how she’s going to get through this and especially about her chances of survival.

Next on Y&R, at Crimson Lights, Nick Newman (Joshua Morrow) and Chance Chancellor (Donny Boaz) will talk. The topic of Adam Newman (Mark Grossman) will come up, and Nick will ask about what happened in Las Vegas. Chance will say that they were in the same place at the same time, and Nick will express concern about Abby Newman (Melissa Ordway) possibly getting hurt.

Young And The Restless Spoilers: Victoria Confronts Billy About His Behavior

Chance will reassure Nick that he won’t hurt Abby, and Nick will ultimately ask Chance to oversee the security system in the New Hope buildings. Chase will happily accept.

Next on Y&R, at the Grand Phoenix, Abby and Chelsea Lawson (Melissa Claire Egan) will have words. Abby will be ruffled about Chelsea getting back together with Adam and hurting Nick. Later, Connor Newman (Judah Mackey) and Adam will show up so that Connor can confront his fear of the hotel.

Adam and Chelsea will explain to Connor that the bad man is in jail now. Phyllis Summers (Michelle Stafford) will arrive and see what’s going on – Abby will explain the situation to her. Chance will then arrive and praise Connor for how he handled himself during the hostage situation. Connor will express surprise when he learns that even Chance was scared, and he’ll feel better after Chance explains that it’s safe to come here now.

Afterwards, Phyllis will express her concern for Connor to Chelsea, then needle her about being with Adam and dumping Nick. Meanwhile, Abby will tell Chance that the more distance he keeps from Adam, the better. After she gets called away, Phyllis will needle Chance about starting a relationship with secrets. And Connor will decide that he feels good about Chelsea working at the hotel.

Next on Y&R, Kyle Abbott (Michael Mealor) and Summer Newman (Hunter King) will head to Society for a meeting after mentioning they’re going on a trip together next week. At Society, Theo Vanderway (Tyler Johnson) will arrive and greet Lola Abbott (Sasha Calle), then greet another woman. This will interest Lola, and Theo will notice that Lola’s watching them.

Summer and Kyle will then arrive at Society and greet Theo and the woman, who will turn out to be an influencer. Kyle will notice that Lola might have been bothered by seeing Theo with the other woman, and he’ll privately confront her about it. She’ll shut that conversation down.

Theo, Summer, and Kyle will talk, and Theo will soon learn about Kyle and Summer’s upcoming trip. He’ll go on about where they should visit, which will include Portland, and Kyle will think that Theo wants him gone and out of the way so Lola will be on her own. Kyle will head to the kitchen and gripe to Lola about Theo’s behavior. After Kyle’s gone, Theo will jab Summer about really wanting Kyle and Lola to be fighting over her.

Back at Sharon’s house, Faith Newman (Alyvia Alyn Lind) will arrive and wonder what’s wrong. Rey will lie and say that he had a difficult case, and he’ll exit to get food. Faith will wonder again what’s going on, and Sharon will say she’s fine. Once Sharon leaves, Faith will find a note with the name of Sharon’s oncologist on it. Faith will call Nick, asking him to meet her at the ranch.

Nick and Faith will eventually meet up at the ranch, and Faith will tell her father that she snooped because she was worried about Sharon. Finally, on Wednesday’s new episode of Y&R, she’ll then show Nick a photo that she took of Sharon’s oncologist’s name – at the breast cancer center.