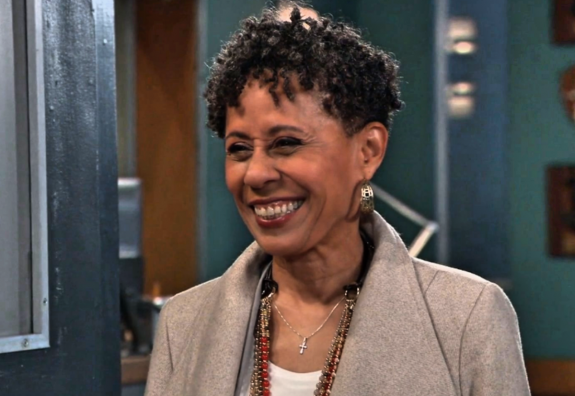 Carly tells Sonny that Ava must have the codicil. The phone rings and Stella Henry (Vernee Watson) arrives. Carly tells Sonny she reached out to Stella to talk about Mike Corbin (Max Gail). Stella realizes that Sonny wants to hold on to Mike but what is Mike holding on to? Sonny says Mike has his family. Stella asks if Sonny wants to take Mike away from the place where he is comfortable.

Sonny explains that Yvonne Godfrey (Janet Hubert) isn’t there. Stella asks what Sonny thinks this trial will do. Sonny says they will know they tried everything. Stella asks how Sonny will feel if it still doesn’t work. Sonny knows the odds aren’t good. Sonny walks Stella out as Jason Morgan (Steve Burton) arrives to tell Carly that Nelle Benson (Chloe Lanier) made parole. Sonny thanks Stella for coming but he’s still taking Mike to New York. Carly asks Jason what Shiloh Archer (Coby Ryan McLaughlin) had that Nelle could use.

Laura listens to Lulu Spencer (Emme Rylan) and Dustin Phillips (Mark Lawson) tells their side of the story. Mack Scorpio (John J. York) and Felicia Scorpio (Kristina Wagner) agree to let everyone go as long as the damages are covered. Lulu and Dustin go to her house and she demands answers. Dustin met Brook at a bar years ago. Lulu can’t believe that Brook dumped Dustin. Dustin reassures Lulu that he doesn’t need Brook in his life.

General Hospital’s Ava and Nik are having drinks. Ava brings up the postnuptial agreement. Nik tries to refuse to sign it. Ava wants an island he doesn’t plan to provide one. Nik tells Ava they don’t share a bed for a future. Nik says once he gets the codicil, their marriage will end.

Nik threatens to kill Ava, she doesn’t think he will. Ava tells Nik he won’t get what he wants until she gets what she wants. Laura asks Ava to stay with her and Nik. Laura says they are adults. Spencer Cassadine (Nicholas Bechtel) still doesn’t know he’s alive. Nik plans to fly to see Spencer tonight. Ava insists on going with Nik to see Spencer. Laura chastises both Nik and Ava and leaves. Ava goes home to pack.

General Hospital’s Tracy Quartermaine (Jane Elliot) tells Olivia Quartermaine (Lisa LoCicero) that she needs to help Ned take over ELQ. Tracy doesn’t believe that Michael is man enough to fill Edward Quartermaine (John Ingle) shows. Michael Corinthos (Chad Duell) arrives late to the meeting because of the drama at the memorial. Michael tries to tell everyone that Shiloh was married to Nelle.

Michael agrees that Olivia should get the shares that reverted back to the family. Brook tries to stop Michael telling him this is a power play. Michael trusts Tracy. Nelle arrives and says surely they didn’t start the meeting without her.

Nelle wants to have lunch with Willow and Harmony soon. Willow tells Chase she’s taking care of Wiley for Brad Cooper (Parry Shen). Harmony wants to make things up to Willow. Harmony will wait outside for Willow. Willow assures Chase that she can handle this.