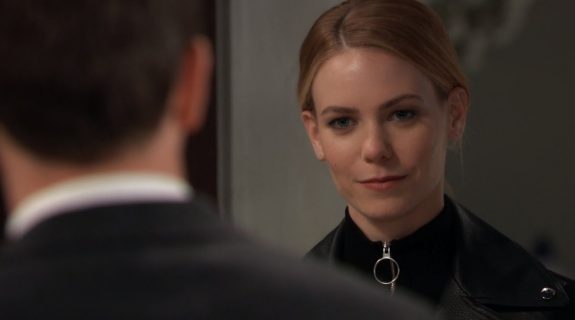 General Hospital (GH) spoilers for Thursday, January 16, tease that Nikolas Cassadine (Marcus Coloma) will face Lulu Spencer’s (Emme Rylan) wrath. When Nik tries to apologize for deceiving Lulu and the rest of his family, Lulu won’t want to hear it. She’ll insist Nikolas should tell her he’s sorry. Lulu won’t think an apology can even begin to make up for the suffering they’ve all endured.

Nikolas will keep trying to make progress, but he’s sure to have some trouble. Speaking of trouble, Julian Jerome (William deVry) will insist there could be some if Brad Cooper (Parry Shen) isn’t careful. He’ll explain Sonny Corinthos’ (Maurice Benard) suspicions and warn that Sonny could find out why they’re uneasy. Julian won’t want Brad making any risky moves that could tip Sonny off to the baby swap.

Other General Hospital spoilers say Sam McCall (Kelly Monaco) will drop a bomb on Alexis Davis (Nancy Lee Grahn). Nelle Benson Archer (Chloe Lanier) pulled off quite a shocker at Shiloh Archer’s (Coby Ryan McLaughlin) memorial service. Sam will bring Alexis up to speed on all the drama and reveal that Nelle is Shiloh’s widow. By now, Sam’s probably wondering if they’ll ever be free of Shiloh’s grasp!

General Hospital Spoilers: Nelle Benson Will Clash With The Quatermaines

Next, Nelle will clash with the Quartermaines. GH fans will see a shouting match at the mansion, where Nelle will make it clear that Shiloh’s ELQ shares are hers. The Quartermaine clan will obviously disagree. Olivia Quartermaine (Lisa LoCicero) will assure Nelle that they’re going to make her life “a living hell.” She won’t want Nelle thinking she’s going to barge in and start running the show.

Ned Quartermaine (Wally Kurth) and Michael Corinthos (Chad Duell) will back Olivia up on that. As for Tracy Quartermaine (Jane Elliot), she’ll hold Michael responsible for this mess. Tracy may think Michael’s need to rescue damsels in distress is what landed them in this situation.

Over with Carly Corinthos (Laura Wright), she’ll change her mind about something. Carly might see just how important this study is to Sonny and throw her support behind it. Regardless, Gladys Corbin (Bonnie Burroughs) will definitely be in Sonny’s corner. She’ll get why Sonny wants to do everything he can for Mike Corbin (Max Gail) – even if it’s a longshot.

General Hospital spoilers say Sonny will turn to Jason Morgan (Steve Burton) for assistance at some point. Whether Sonny’s favor involves Mike’s trip or something pertaining to Nelle, Jason should follow orders. He’s always willing to step up for Sonny when it counts.

It sounds like some excellent scenes are on the way. We’ll give you updates as other GH news and rumors emerge. Stick with the ABC soap and don’t forget to check back often for the latest General Hospital spoilers, rumors, updates and news.