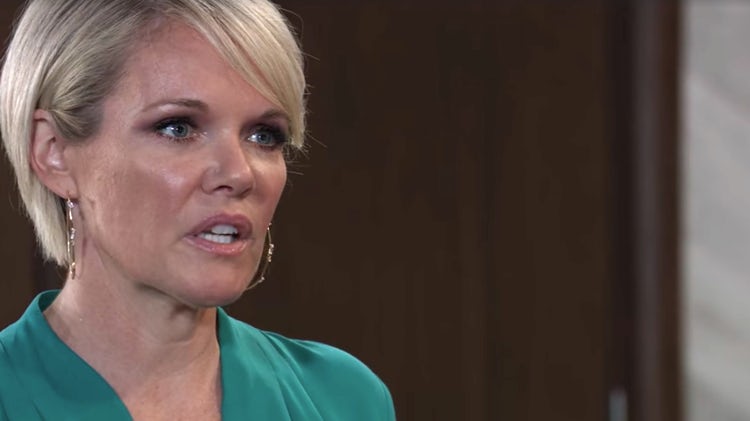 General Hospital spoilers tease that Trina Robinson (Sydney Mikayla) will play along with her boss Ava Jerome’s (Maura West) scheme when Nikolas Cassadine (Marcus Coloma) comes to the art gallery in an upcoming episode of GH!

As General Hospital viewers will recall, Nikolas married Ava as part of a bargain where she was supposed to give him the codicil to Mikkos Cassadine’s (John Colicos) will, which disinherits Valentin Cassadine (James Patrick Stuart) and then after he married her, she wouldn’t give it to him! She told him she needed it as leverage over him! So, Nikolas has to find another way to get his hands on that codicil before Valentin does.

The only thing is, he doesn’t know that Martin Gray (Michael E. Knight) already had a copy he talked to Valentin about in the booking room at the PCPD, or at least had read it – how else would he know that the codicil was straightforward if he hadn’t read it?

Nikolas will figure, since Ava told him that the codicil was somewhere he would never find it, it must be in the art gallery; possibly behind a different portrait? Then again, Helena Cassadine’s (Constance Towers) original portrait might be there hidden intact; no one got close enough to the one that burned up during the art auction to really check out if it was the real deal or if it was merely a print! Ava would have taken the real one out of its frame as well, because she knew there was something important hidden in it and would have removed the codicil before putting the portrait back into its frame.

She knows the value of any painting by J. Garren as well, so she probably did replace the portrait with a fake which is what burned up. The fake, if indeed it was one, had been taken out of the original frame as well! General Hospital viewers will recall that Ava had covered the original up with a different painting to hide it from prying eyes before. Ava, anticipating that Nikolas would come to the gallery looking for the codicil or even the portrait itself, will give Trina some specific instructions on how to handle Nikolas and what to tell him if he does show up!

Of course, Trina probably doesn’t know that Ava is playing Nikolas. She may not want to go along with a scheme like that so Ava will be playing her along with Nikolas or anyone else who comes calling to see if the real painting or the codicil is still hidden in the gallery. Nikolas probably won’t just break in again, or then again he might; but either way, he will encounter Trina.

Trina will instruct him however Ava instructed her, whether it be telling him that it isn’t there, or telling him it’s in a safety deposit box in a bank, or something else. Nikolas may indeed try to break in after he finds that out because he won’t believe Ava, and it’s questionable if he will even believe Trina!