General Hospital Spoilers: What Is Going On With Jordan’s And Her Colleague’s Death By Overdose 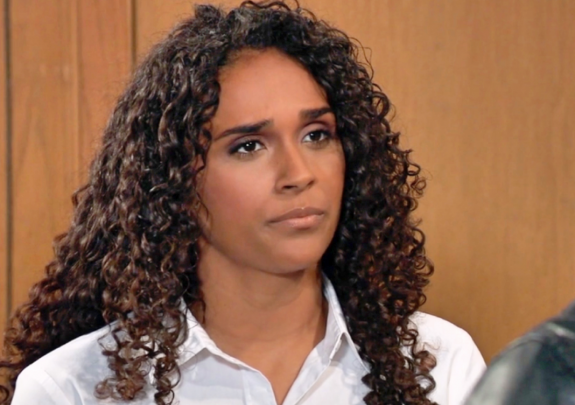 General Hospital (GH) spoilers tease that Jordan Ashford (Brianna Nicole Henry) just hasn’t been herself since she got word that a former colleague of hers died. It seems that they were very close, and the way Jordan is acting, it may have been a romantic relationship or an affair of some sort.

GH Spoilers: Curtis Ashford Found Out How He Died

Seeing how upset Jordan was, her husband Curtis Ashford (Donnell Turner) reach out to a contact he had on the police force in DC, where Jordan’s friend died. Jordan was expecting to hear he died from natural causes or a heart attack or something of that nature, but Curtis told her the man overdoes on opioids.

General Hospital Rumors: Could Someone Be Out To Avenge The Death Of Sonny’s Foreman?

Jordan said that wasn’t likely because the man she knew, barely drank, let alone used narcotics. And while Curtis explained how easy it becomes for addicts to hide their addiction, Jordan still wasn’t buying it.

General Hospital Spoilers: Is This Just A Matter Of Jordan Wanting To Get Justice?

Is this a matter of Jordan just wanting to get to the truth for an old friend? After Curtis left, Jordan made a phone calling telling someone on the other end to high tail it to Port Charles. Whoever was on the other end is likely to be another former colleague of Jordan’s. This seems more and more like a case from Jordan’s past is going to come back to haunt her. She might even be the next target if someone she and her colleagues put away wants revenge or thinks they know too much?

Is the man who died simply an old friend of Jordan’s or was it romantic? Could an old case that they worked on together be connected to it or was it really a matter of a drug addiction that Jordan didn’t know about? Time will tell, ao stay tuned to General Hospital airing weekdays on ABC. And don’t forget to check back here regularly for all your General Hospital news, information and spoilers!