The Bold and the Beautiful Spoilers: Thomas Pressures Steffy To Keep Secrets 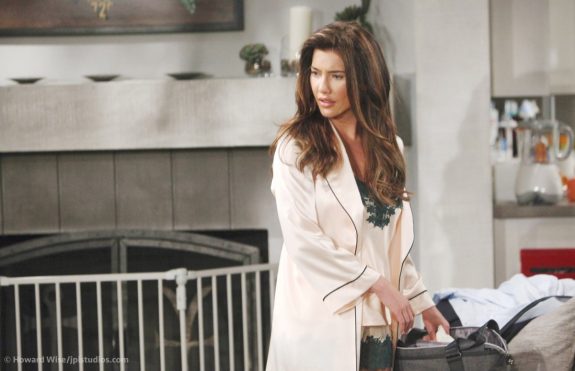 The Bold and the Beautiful spoilers reveal Thomas Forrester (Matthew Atkinson) is pressuring his sister. After convincing her to team up with him on a scheme, he wants Steffy Forrester (Jacqueline MacInnes Wood) to keep it from Liam Spencer (Scott Clifton). Is he asking too much or will she risk everything in order to hold onto the man she has never stopped loving?

B&B spoilers confirm that Thomas knew Hope was on her way just in time to see Liam and Steffy kiss. Watching from a distance, Thomas set up heartbreak for the woman he supposedly loves. He also put Steffy in an awkward position because now it seems like she has been after him all along.

The Bold and the Beautiful Spoilers: Sally Puts Wyatt Before Career – Will She Regret It?

In Thomas’ mind, he was committing a necessary evil. His main priority was to get Liam and Hope apart. Having her heart torn out of her chest was one way to do that.

At the same time, Thomas also wanted Steffy to have some happiness and Liam is what her heart desires. In his warped way of thinking, Thomas actually thought he was doing his sister a favor.

The Bold and the Beautiful spoilers reveal that Steffy will end up feeling conflicted about the whole situation. She knows it was wrong to kiss another woman’s partner. This will intensify after Liam confesses to her, which is presumably that he wanted the kiss just as much as she did.

Then, there is the added pressure of Thomas’ request. He urges her not to say anything to Liam about their little secret.

The Bold and the Beautiful Spoilers: Romantic Turmoil

Steffy knows what happens to couples when they begin (or rekindle) a relationship that isn’t based on total honesty. Secrets build up, the lies continue to mount and things get really messy. Then, there is the heartache once everything is out in the open.

‘The Bold and the Beautiful’ Spoilers: Liam Must Adapt To Changing Circumstances – Hope Has Had Enough https://t.co/ipJtWk5UOe pic.twitter.com/siP5lwcBop

On the other hand, Steffy hasn’t dated anyone since the “Steam” split. She still has a picture of her and Liam on her wall. She signed up for a dating app but hasn’t filled out a profile or interacted with anyone. Then, there is her immediately saying no to a drink. Sure, he may not have been her type, but a drink never hurts.

It seems that she will have a lot of inner turmoil due to Thomas pressuring her to keep quiet. So, does she go with her head or her heart and will there be any consequences later on?