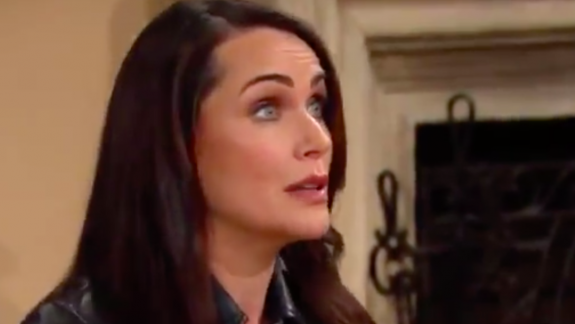 The Bold and the Beautiful spoilers for Thursday, January 16, tease that Eric Forrester (John McCook) will do his best to calm down Brooke Forrester (Katherine Kelly Lang) as she continues badmouthing Shauna Fulton (Denise Richards) and Quinn Forrester (Rena Sofer) at the Forrester mansion. As B&B viewers know, Brooke has just barged into the mansion and demanded that Eric kick both Shauna and Quinn to the curb.

Of course, that’s a monumental demand, and it has come out of Brooke’s anger over Ridge Forrester’s (Thorsten Kaye) recent kisses with Shauna. Even though Brooke is the one who initiated her split with Ridge, she blames Thomas Forrester (Matthew Atkinson) for driving a wedge between them, and now she’s blaming Shauna for befriending Ridge. Brooke thinks that her marriage is under attack, and she’s not happy about it.

The Bold and the Beautiful spoilers say that things will turn ugly on Thursday’s episode. As B&B viewers will remember, Quinn has been listening to Brooke and Eric’s conversation from the top of the staircase, and she’s not at all amused.

From here, it looks like an explosive scene will develop. According to B&B spoilers, Brooke and Quinn will have an intense showdown, so it looks like Quinn won’t be eavesdropping for long. Of course, Quinn isn’t one to back off from a fight, so she’ll probably come downstairs and get in Brooke’s face, and vice versa. Look for Quinn to confront Brooke and for things to get out of hand quickly.

Bold And The Beautiful Spoilers: Shauna Fulton & Eric Forrester Get Drawn Into The Fight

In fact, B&B spoilers indicate that Brooke and Quinn will openly declare war on each other, and that eventually Shauna and Eric will get involved in the argument. Shauna should watch out, because now that Brooke knows about her kisses with Ridge, she’ll be on the warpath. By week’s end, look for Brooke to slap Shauna once again.

Meanwhile, on Thursday’s new episode of B&B, Flo Fulton (Katrina Bowden) and Wyatt Spencer (Darin Brooks) will head over to the meeting that Katie Logan (Heather Tom) has called. As B&B viewers know, Katie left messages for both Wyatt and Flo, leaving them wondering what was going on. It looks like they’ll show up at Spencer Publications for the mysterious gathering.

Katie will have summoned some others for the meeting as well, including Bill Spencer (Don Diamont), Will Spencer (Finnegan George), Donna Logan (Jennifer Gareis), and Justin Barber (Aaron D. Spears). According to B&B spoilers, Katie will have an agenda, and it will be something that takes everyone present by surprise.

First off, Katie will make a special request that nobody will have seen coming. Exactly what that request will be remains to be seen, but it could have something to do with Katie’s new lease on life. Perhaps she’s starting a new foundation or system for people to be matched with anonymous kidney donors.

Or, given that Flo was invited to the meeting, it could have something to do with her. Perhaps Katie will want the family to formally forgive Flo and move on with their lives. Interestingly, B&B spoilers also say that Katie will ask her family for forgiveness at the meeting, which is curious.

Katie hasn’t really done anything that she’d need to ask for forgiveness for, so that will remain a puzzle until Thursday’s episode. At any rate, it looks like it will be an important meeting that will leave everyone pretty surprised.