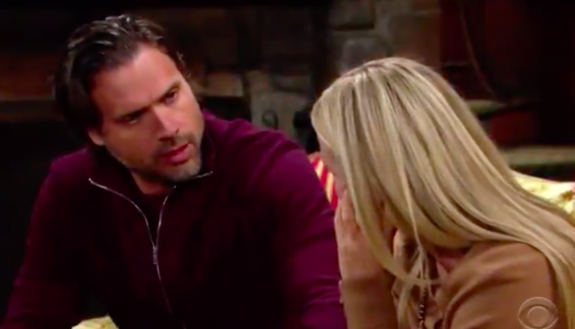 The Young and the Restless (Y&R) spoilers for Thursday, January 16, tease that Nick Newman (Joshua Morrow) and Faith Newman (Alyvia Alyn Lind) will discuss the note that Faith found among her mom’s things. Nick will say that they shouldn’t assume the worst, but Faith will think that he thinks Sharon Newman (Sharon Case) is cancer patient. She’ll ask him to find out, and he’ll agree.

Next on Y&R, at the breast cancer center, Rey Rosales (Jordi Vilasuso) will be with Sharon for support – he’ll take notes as Sharon talks to the oncologist. Sharon will ask the doctor if she can beat this, and the doctor will say that while there are no guarantees, she has a good chance of beating it. Sharon will have Stage 2 cancer and will be facing chemotherapy, then surgery.

Sharon will learn that chemo will come first to reduce the size of the tumor, then surgery to remove the tumor. Sharon will inquire about a mastectomy, and the doctor will say that there is no advantage to having one in her situation. Sharon will ask when they start.

Young And The Restless Spoilers: Nick Newman Offers Sharon Newman All His Support

Later, Sharon and Rey will be at home, and when Rey steps out, Nick will knock at the door. Sharon won’t want to answer but Nick will insist, so she’ll answer the door. Nick will explain that Faith found the note, and that a lot of people really care about her and want to know what’s going on.

Next on Y&R, Tessa Porter (Cait Fairbanks) will play a song for Mariah Copeland (Camryn Grimes) over the phone, explaining that she’s been writing music with Tanner Watts (Chase Coleman). Mariah will love the song and will think it will be a hit. Tessa will explain what they’ve been up to, and that Tanner gets treated like he’s royalty. They’ll be headed to a party on a private yacht later.

Mariah will hang up and notice Summer Newman (Hunter King) at Society. Mariah will jab at Summer about Kyle Abbott (Michael Mealor) and Theo Vanderway (Tyler Johnson), but Summer won’t be in the mood for the back-and-forth. Mariah will wonder what’s going on, and Summer will reveal how Kyle is letting Theo get to him.