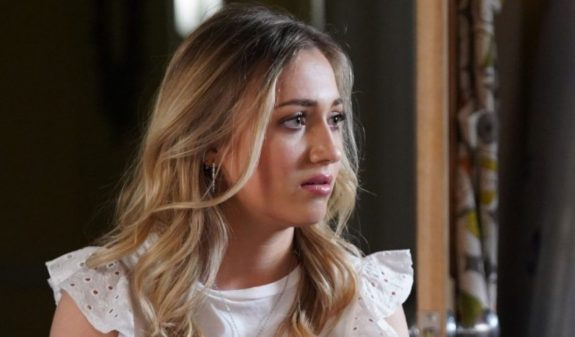 Another character is leaving “EastEnders,” as the show lines up an exit storyline for Louise Mitchell (Tilly Keeper). She’ll struggle with the guilt of her involvement in Keanu’s “death.” She’ll go on a downward spiral, which forces Lisa to bring Louise with her to Portugal so she could avoid and forget all the chaos that has happened in Walford.

Keeper confirmed that she’s leaving the show after joining the cast back in 2016. But it won’t be just a simple send-off. The actress will bow out of Walford in a dramatic storyline.

A lot of viewers were shocked when Louise set up her cheating fiancé, Keanu Taylor (Danny Walters), which lead to his supposed “murder” by Martin Fowler. She was furious at Keanu for what he did. She told him, “Never, ever take a Mitchell for a fool,” before Martin hauled him away.

Eastenders Spoilers: Linda Fears She May Have Cheated On Mick

As far as she knows, Keanu is dead and this was supported by Martin who showed a video of Keanu getting shot in the head.

She and the rest of the Mitchells remain none the wiser that Keanu is alive. Fans may recall that a drunk Linda Carter (Kellie Bright) unintentionally stumbled into the scene where Martin was about to kill Keanu. She ended up helping Martin set up Keanu’s fake death. He was shot in the shoulder and was allowed to escape. However, he can never return to Walford and this has led to Keanu exit.

Louise is struggling with the guilt of what she did and she recently broke down and told her mother about her involvement in Keanu’s death. But the truth about Keanu’s death may seal her exit from Walford.

Lisa will decide to whisk her off to Portugal, an idea that Phil Mitchell (Steve McFadden) won’t agree on. But since Keeper is set to leave the show, her onscreen dad may not be able to stop her.

Keeper said, “What a way to go out. I’m leaving on a high, I’ve had a really great year and I’ve really enjoyed working on this story, and it’s given me something to get my teeth into, so I’ve really loved it.”

“It’s been a really good challenge for me, and I just think how lucky am I?” she added.

“I’ve had a really great year working with Tish and Danny, and Max and James towards the end. Lucy coming back as well, so I’ve had everything that I could’ve asked for,” she continued.

Executive producer Jon Sen added: “Tilly has been an incredible asset to the EastEnders cast and a wonderful company member. Her portrayal of Louise Mitchell over the past years has been a joy to watch,” he said.

“We wish her well in all her future endeavors,” he continued.

Nobody knows the exact date of Keeper’s exit so viewers have to tune in to find out. Since her character isn’t being killed off, there’s a possibility that she might return.