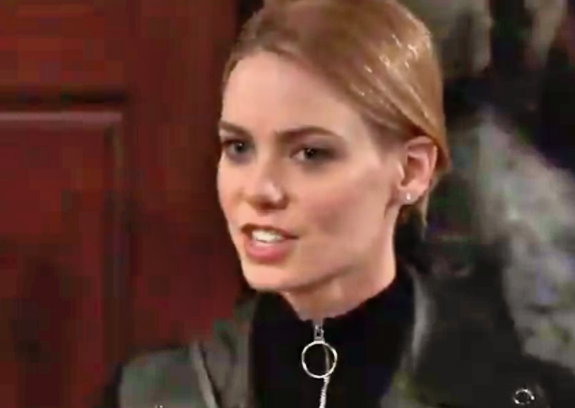 GH Spoilers: Nelle Benson Has An Injunction To Vote The Shares

Nelle is informed that the family is going to fight her receiving any shares. Martin says they have an injunction allowing her to vote the shares. The Quartermaine lawyer explains that Oscar Nero (Garren Stitt) left two wills. Martin argues that the probate court has to make this decision. The attorney plans to call the court to find out. Nelle gloats. Martin is escorted out. Michael offers to buy Nelle’s shares.

General Hospital Spoilers: Will Spinelli Suffer A Devastating Loss On Their Way Back To Port Charles?

Nelle says that isn’t spare change for them. Ned says it’s a fair offer. Nelle brings up Jonah. Nelle refuses to take the deal and says she’s not going anywhere. Brook Lynn goes after Nelle herself. Brook tells Nelle she’s trash and will end up with nothing. Nelle grabs Brook who tells her assault is a parole violation. Nelle tells Martin this isn’t a safe place for her and leaves. Tracy tells Brook her great grandfather would be proud.

Michael apologizes to everyone. Brook and Ned throw Tracy’s husband’s back in her face. Ned tells Tracy she doesn’t have a leg to stand on. Michael says Tracy is right, he screwed up. Michael plans to do everything he can to get rid of Nelle. Sam McCall (Kelly Monaco) arrives as the ELQ lawyer leaves. Ned says this could go either way with Oscar’s will. Michael explains to Sam what is going on. Michael thanks Brook for handling Nelle, the others agree. Brook says they protect their own.

General Hospital’s Lulu Spencer (Emme Rylan) tells Nikolas Cassadine (Marcus Coloma) that Charlotte Cassadine (Scarlett Fernandez) could have died because of him. Nik says Charlotte saw him when Cassandra Pierce (Jessica Tuck) kidnapped her. Lulu tells Nik they are supposed to be family. Lulu tells Nik he was never like the other Cassadines. Lulu wants to know what happened.

Lulu can put herself in his position. Nik says she can’t possibly know what that felt like. Nik says it was like he never existed. Lulu says they could have fought this out together. Nik says the only chance he had to stop Valentin Cassadine (James Patrick Stuart) was to play by his rules. Nik promises to make it up to all of them. Nik had to get his life back, he had to prove he was the true Cassadine heir. Lulu hopes Nik comes to his senses and she gets her brother back.

General Hospital’s Jason Morgan (Steve Burton) explains to Carly Corinthos (Laura Wright) about Oscar Nero’s (Garren Stitt) wills. Carly says someone should run over Nelle with a truck, Jason suggests someone might. Sonny Corinthos (Maurice Benard) arrives, he’s made a decision about his father. Sonny plans to go with Mike Corbin (Max Gail) to be evaluated. Carly tells Sonny to do what he thinks is best. Stella can be objective and she can’t. Carly absolutely supports Sonny. Carly wants what is best for them.

Sonny asks Jason to do him a favor. Sonny plans to call a meeting while Mike is in the hospital. Carly question if this is a good time to make this a business meeting. Carly suggests she or Stella go with Mike. Sonny wants to go back to Brooklyn because he grew up there and it was a big part of this father’s life. Sonny is taking Jason for back-up. They agree that this is Mike’s last shot. Carly doesn’t want Sonny to call a meeting.

Jason says if Mike is himself for two minutes its better than nothing. Carly says she needs to stop trying to protect Sonny. Sonny plans to call to check on Mike. Sonny tells Jason how good this is gonna be. Carly asks Jason about his separation from Sam. Jason says it’s hardest on the kids.

Jason calls a lot and video chats. Carly asks how long this is supposed to go on. Jason says until they find a way around this situation. Carly asks if this is bad timing. Sonny comes back in as Gladys Corbin (Bonnie Burroughs) arrives. Sonny tells Gladys he’s having Mike evaluated tomorrow. Gladys offers to tag along. Gladys wants to stay another night. Carly agrees to let her stay for Mike’s sake.

General Hospital’s Sam tells Alexis Davis (Nancy Lee Grahn) that Nelle is Shiloh’s widow. Sam wasn’t there long enough to figure out what Nelle was up to. Sam is worried about Michael. Alexis tells Sam to be careful. Alexis tells Sam about Neil Byrne’s (Joe Flanigan) issues. Alexis is upset over Neil’s predicament. Alexis plans to defend Neil. Jason calls Sam and tells her he is going out of town with Sonny. Sam tells Jason to be safe. Jason says they will figure this out.

General Hospital’s Julian Jerome (William DeVry) beats on Brad Cooper’s (Parry Shen) door until he answers. Julian tells Brad he’s losing it and Sonny is going to figure this out if he doesn’t get himself under control. Julian says Sonny heard about the conversation on the pier. Julian says he handled it. Julian tells Brad he lied to Sonny. Brad is to keep all Corinthos’ at arm’s length.

Brad refuses he is overwhelmed and isn’t protecting Julian. Brad agrees to go along with Julian’s cover story. Julian tells Brad to ignore Nelle and to let him know if she reaches out. Brad doesn’t know how much longer he can do this. Brad wants this to go away. Brad wants Lucas to wake up. Brad would spill the whole story if he thought it would help Lucas wake up. Julian goes to the chapel to pray, Alexis interrupts.

Alexis has an AA meeting. Julian and Alexis talk, she offers to listen to him. Alexis has to speak to Ned. Julian is shocked that Nelle has been released. Nelle shows up with her stuff at Brad’s house. Brad demands to know why Nelle is there. Nelle tells Brad she’s staying there. Nelle will move after her legal issues are cleared up. Nelle will finally have everything she ever wanted.

As always, more detailed spoilers and a full collection of pictures for the week in question will appear here on Hollywood Hiccups, when there could be more clues and hints over exactly what’s going on. General Hospital airs weekdays on the ABC network.