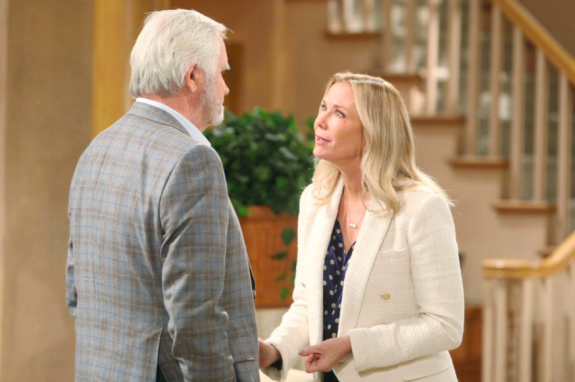 The Bold and the Beautiful spoilers document that Brooke Logan (Katherine Kelly Lang) is use to getting what she wants. Her actions and words come across as wanting to control the lives of those she’s connected to.

So, telling Eric Forrester (John McCook) that he should kick Shauna Fulton (Denise Richards) out of his guest house would have been debatable. But including Quinn Forrester (Rena Sofer) as also being in need of the boot ruined the legitimate point Brooke was trying to make.

Eric was not pleased with Brooke’s take on his wife, her friend, or his family. Brooke continues to flail, as she deals with the problems she believes are fully caused by Shauna and Thomas Forrester (Matthew Atkinson).

The Bold and the Beautiful Spoilers: Wyatt Leaning Towards Reunion With Flo – Leaves Sally Behind

Thomas remains exactly what Brooke thinks he is, a serious trouble-maker. She doesn’t even know that Atkinson’s character engineered the circumstances behind the kiss that Steffy Forrester (Jacqueline MacInnes Wood) had with Liam Spencer (Scott Clifton).

Lope’s breakup was caused by Thomas. But Bridge hasn’t yet collapsed, despite Shauna’s insinuation of herself into Ridge’s life. While Thomas drove he drama that directly affected Brooke’s marriage, Shauna has become the center of developing issues.

Bold And The Beautiful Spoilers – Shifting Focus To Shauna Fulton

Brooke was initially welcoming to Shauna, whose daughter, Flo Fulton (Katrina Bowden) was discovered to be a Logan. But fond family feelings were later rescinded when Flo’s roll in the Beth Spencer (Madeline Valdez and River Davidson) arc was revealed.

Shauna’s intentions toward Ridge Forrester (Thorsten Kaye) weren’t driven by anything to do with Brooke. Richards’ character simply saw him as attractive until he opted not to fight Flo’s immunity deal. At that point Shauna was smitten.

Ridge’s risky, but honest admission to Brooke about him having kissed Shauna turns her into the number one target of Lang’s iconic character. In effect, Shauna now serves in the spot that Taylor Hayes (Hunter Tylo) held, or will regain whenever she returns.

The Bold and the Beautiful Spoilers: Thomas and Quinn Take Down Brooke? Offering Steffy a Deal @celebratesoaps #bb #Boldandbeautifulhttps://t.co/joBi2qjYeG

Bold And The Beautiful Spoilers – Brooke Logan Must Be Careful

The truth is on Brooke’s side. But, due to the very emotional issues she’s confronting, she’ll need to be very very careful moving forward.

Ridge still loves Brooke, but has demonstrated that he’ll leave her if an impasse is reached. Yes, he didn’t file the signed divorce papers. But he still could if pushed too far.

Thomas is a master manipulator. Shauna achieved significant progress in a short time. Both people are strong opponents and have already aligned themselves against Brooke. A full-on tag team effort could destroy her. So precise moves will have to be made next if she hopes to protect and defend those she loves.