The Bold and the Beautiful Spoilers: Friday, January 17 – Eric Tries To De-Escalate Quinn & Brooke’s Feud – Wyatt Has Difficulty Breaking Up With Sally 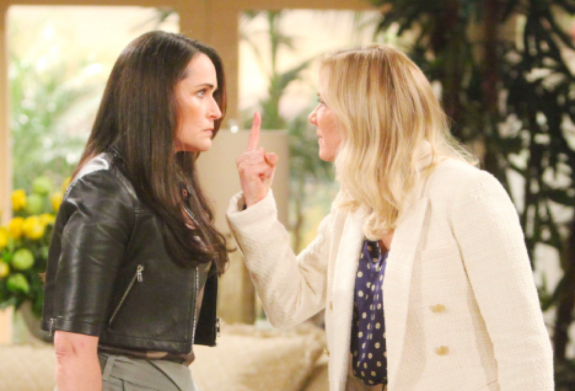 The Bold and the Beautiful spoilers for Friday, January 17, tease that Eric Forrester (John McCook) will get pulled into the horrible altercation that’s going down between Brooke Forrester (Katherine Kelly Lang) and Quinn Forrester (Rena Sofer). As B&B viewers know, Brooke and Quinn were engaged in a major shouting match when Shauna Fulton (Denise Richards) entered and everything went haywire.

Brooke basically threw every insult in the book at Shauna, saying that she was beneath Ridge Forrester (Thorsten Kaye), which prompted Shauna to say that it didn’t seem that way when Ridge was kissing her. Brooke then slapped Shauna, prompting Quinn to get in Brooke’s face and slap her, causing Brooke to stumble.

B&B Spoilers: Eric Forrester Gets In The Middle of A Major War

It appears that Eric may return home to the ugly scene, as B&B spoilers say that he’ll get pulled into the fray and try to de-escalate things between Brooke and Quinn. We wish Eric luck with that, since both ladies have openly declared war on each other. As B&B viewers know, Brooke has never liked Quinn and she clearly remembers when Quinn was after Ridge herself. Brooke has never really gotten over that, and it seems to be underlying her fury now.

We’ll see where this all goes on Friday’s B&B episode, but ongoing B&B spoilers indicate that Eric will eventually ask Shauna to leave the premises, which Quinn is certainly not going to like at all. Of course, knowing Quinn, that might make her dig in her heels and go after Brooke all the more!

Meanwhile, on Friday’s new episode of B&B, Wyatt Spencer (Darin Brooks) will have a difficult task in front of him. As B&B viewers know, he and Flo Fulton (Katrina Bowden) just reconnected in a big way after the meeting that Katie Logan (Heather Tom) called at Spencer Publications. Katie asked her family to forgive Flo, and Wyatt was happy to do so.

But Wyatt also had a big confession for Flo. He admitted that he had never stopped loving her, and that he still dreamed about having a life and a family with her. It certainly looks like Wyatt knows what he wants, and that it’s Flo.

Well, on Friday’s episode of B&B, Wyatt will head home, and he’ll have to talk with Sally Spectra (Courtney Hope) about what’s happened. He’ll probably brace himself for a big-time conversation where he admits that their engagement and their relationship is no longer what he wants. In other words, he’ll be poised to break up with Sally.

But B&B spoilers say that Wyatt will have a tough time breaking things off with Sally. It appears that Wyatt will come home to a romantic setup, complete with a lingerie-wearing Sally. This will probably make Wyatt feel terrible about what he’s about to do. In fact, Sally will clearly be very much in love with him, which will make this all the more difficult.

Of course, since Wyatt and Sally haven’t really been connecting lately, he probably won’t know about the problems that she’s been having at Forrester Creations as of late. As B&B viewers now, Ridge and Steffy Forrester (Jacqueline MacInnes Wood) seem to be on the verge of firing Sally, and so Sally will decide to put Wyatt before her career, which will likely be what her special evening with Wyatt will be about.

Unfortunately, it looks like Sally will go into the evening thinking that even if she loses her career, at least she has Wyatt. But it seems that she’ll soon be on the verge of losing both her career and Wyatt, which will be truly unfortunate.