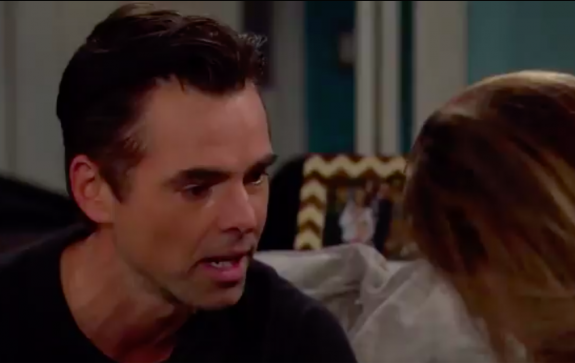 The Young and the Restless (Y&R) spoilers for Friday, January 17, tease that Mariah Copeland (Camryn Grimes) will be at Society looking at Tessa Porter’s (Cait Fairbanks) social media feed when she gets a text from Sharon Newman (Sharon Case) wanting her to come to the house.

Across the room, Nikki Newman (Melody Thomas Scott) will sit down with Victoria Newman (Amelia Heinle), who will show Nikki the bar receipt from Billy Abbott’s (Jason Thompson) coat. Nikki will tell her daughter to let Billy know that he can be honest with her and that she won’t judge him.

Next on Y&R, at the little bar outside of Genoa City, Billy will talk with Amanda Sinclair (Mishael Morgan) about recent goings-on before admitting that he lied about them to Victoria. Amanda will say that he should ask himself why he feels the need to lie about seeing her, but Billy will insist that he’s not looking for more than friendship. Amanda will suggest that he have a serious conversation with Victoria.

When he reveals that he’s been talking with Amanda, Victoria will hit the roof that he’s opened up to Amanda while shutting her out. She’ll accuse Billy off getting off on chaos and she’ll say that she doesn’t know who he is. Billy will try to embrace her, but Victoria won’t have it.

Young And The Restless Spoilers: Adam Newman Has Big Plans For Dark Horse

Next on Y&R, Victor Newman (Eric Braeden) will welcome Adam Newman (Mark Grossman) and Chelsea Lawson (Melissa Claire Egan) to the ranch. Soon, Nikki will arrive and the four will chat. They’ll talk about Connor Newman (Judah Mackey) and his successful trip to the Grand Phoenix. Nikki will inquire about Connor going back to school, and Adam will explain that they’ll decide what is right together.

Nikki will speak to Victor privately and remind him that Adam’s happiness came at Nick Newman’s (Joshua Morrow) expense. They’ll all have dinner, and when Adam and Victor are alone, Adam will say that he plans to resurrect Dark Horse, which will amuse Victor, since Dark Horse was initially created by Nick to compete with Newman Enterprises.

Later, at the penthouse, Adam will tell Chelsea about his plans for Dark Horse. She’ll support him fully. Adam will think that it’s impossible for him to love her any more than he does now. They’ll happily kiss.

Next on Y&R, at Sharon’s house, Nick and Faith Newman (Alyvia Alyn Lind) will arrive. Faith and Sharon will embrace, and Faith will apologize for snooping before Sharon explains that she has breast cancer, along with her prognosis and course of treatment. Faith will relay that a girl at school dealt with her mom having cancer as well, but that she is better now.

When Rey Rosales (Jordi Vilasuso) takes Faith upstairs, Nick and Sharon will greet Mariah, who will soon get the news about her mom’s cancer. Mariah will want to help with whatever her mom needs, and Sharon will say that Faith will need her big sister to get through this. When Faith comes back, Sharon will tell them both about the importance of self-exams, and they’ll all head upstairs so Sharon can show them what the lump feels like.

Young And The Restless Spoilers: Sharon Newman Will Express Her Gratitude

Later, Sharon will express her gratitude for her family, and they’ll join hands as “team Sharon” and they’ll declare that their mission is to be there for her until they’re through this. Faith will not go back to boarding school for the time being, either. Once everyone else has gone, Sharon will tell Rey that she’s terrified, and they’ll embrace emotionally.

Back at her apartment, Mariah will be upset by Sharon’s news. She’ll leave Tessa a message saying that she misses her and needs to hear her voice. She’ll tell Tessa that she loves her. Finally, on Friday’s new episode of Y&R, Nick will console Faith, who’s crying and upset about Sharon’s cancer.