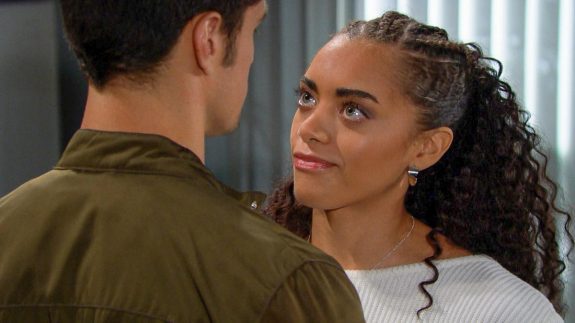 The Bold and the Beautiful spoilers reveal Zoe Buckingham (Kiara Barnes) has a strong reaction to being played. Thomas Forrester (Matthew Atkinson) wasn’t as interested in her as she thought. It was all a scheme to get Hope Logan (Annika Noelle). Could the model go after her competition and become an unexpected villain? That is what some fans are predicting.

B&B spoilers indicate that Zoe has strong feelings for Thomas. She even made a bold move by kissing him. At that time, he couldn’t talk about anything except Hope. However, things would turn in Zoe’s favor when Thomas suddenly asked her out on a date. At least, that is what she thought.

Thomas is playing games with Zoe’s head and heart. His ultimate goal is to make Hope his own. However, his previous schemes didn’t work. That is when he came up with a plan to make everyone, including Hope, believe he had moved on and Zoe was the perfect pawn. However, his manipulation will come to light very soon.

The Bold and the Beautiful spoilers reveal Hope is heartbroken over Liam Spencer (Scott Clifton) and Steffy Forrester’s (Jacqueline MacInnes Wood) kiss. She ends up falling into Thomas’ arms and he holds the devastated young woman.

The moment isn’t kept secret, though. While he relishes in getting close to an unsuspecting Hope, there is a theory that Zoe walks in. Understandably, she is upset and could lash out at both Thomas and Hope.

Bold and the Beautiful Spoilers: Sally Spectra To Be Killed Off From Devastating Disease? @celebratesoaps https://t.co/YWDskFqrUi

The Bold and the Beautiful Spoilers: Romantic Revenge

Zoe lost everything due to the “PhoeBeth” scheme. She is now getting everything back. This includes her job at Forrester Creations and the man her heart desires. By finding out she was just part of a romantic ruse, it could set off the model.

Not willing to lose anything of hers ever again, could she target Hope and become the next villain? That is what some viewers are predicting. To find out if this actually happens, keep watching the CBS soap opera.

Be sure to tune in to catch up on everything happening with B&B spoilers right now. Come back here often for The Bold and the Beautiful spoilers, news, updates and rumors!