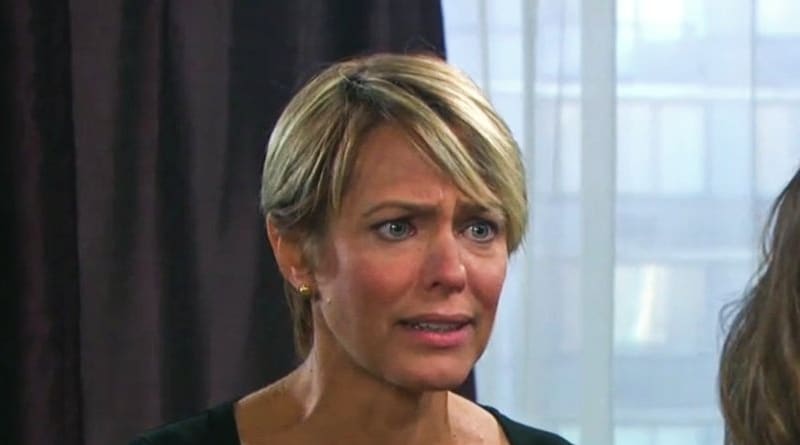 Days of Our Lives spoilers reveal Nicole Walker (Arianne Zucker) came up with a romantic ruse to convince Kristen DiMera (Stacy Haiduk) that Brady Black (Eric Martsolf) was unavailable. However, it might blow up in her face. There is a theory that Kristin could tell Eric Brady (Greg Vaughan) that the love of his life has moved on with his brother.

DOOL spoilers indicate Nicole worries about Kristen getting her hooks into Brady again. To protect her friend and former love interest, she makes Kristen believe that she is involved romantically with Brady again. After some hesitation, Brady agrees to the scheme.

The love scam has worked so far. It wasn’t hard to convince Kristen since she already spotted Brady and Nicole kissing not once, but twice. It’s what set her off the woman when she physically attacked Nicole. However, schemes always blow up in Nicole’s face and this one won’t be any different.

Days of Our Lives spoilers reveal Eric returns from Boston. His infant daughter, Mackenzie “Mickey” Horton (the May twins) is battling cancer. While all of his focus is on her, that doesn’t mean he hasn’t thought about how he left things with Nicole. It is speculated that when he returns, he hears that Brady and Nicole are together, even though it’s a ruse.

There is a fan theory that Kristen will tell Eric that “Bricole” is back on and Nicole moved on from the love of her life quite quickly. This goes along with the spoiler that Eric ends up feeling betrayed by Nicole once again. Knowing Eric, he will confront Nicole and she will try to explain.

However, he might have had enough and storm off not realizing that the “relationship” between Brady and Nicole is fake. Once again, Nicole’s scheme will blow up in her face and she will wonder how things could have gone so wrong. To find out what happens when Eric comes back to Salem, fans will have to keep watching the NBC soap opera.

Be sure to tune in to catch up on everything happening with DOOL spoilers right now. Come back here often for Days of Our Lives spoilers, news, updates and rumors!