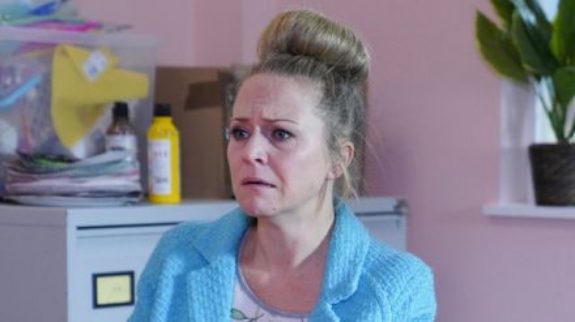 In recent weeks, Linda Carter’s combined drinking and marriage problems have been escalating, which could lead to disaster in the family.

In recent episodes of “EastEnders,” Linda Carter (Kellie Bright) has been struggling to get her drinking under control. This included ruining Christmas by making a scene on Christmas Eve and then disappearing. The New Year brought more problems when Linda awoke in bed with a strange man and now believes she may have cheated on her husband, Mick.

Mick has been going through a major change on “EastEnders”, but is now starting to accept he has mental health issues. First there was the collapse, which he believed to be a heart attack, but which turned out to be a severe anxiety attack. Mick is taking medication, but it might not be enough.

Mick has the stress of worrying about their son, Ollie, with his diagnosis of autism, along with the major stress of running the pub. Neither of these worries is good for his health. Linda has been battling alcoholism, which is yet another major stresser for Mick, as he tries to be brave for his family. But how much longer can he carry on like this?

While Linda battles her alcoholism, it seems she has no real idea that she has a drinking problem. On top of this, she doesn’t realise the effect it is having on Mick. Every time Linda picks up a glass to celebrate, Mick’s anxiety levels increase dramatically. While he tries to explain to her that he is worried for her, she refuses to listen.

“EastEnders” stresses Linda’s drinking problem, but also gives an idea of how people experience mental health problems, keeping their worries to themselves and not looking for help. Many viewers will be able to relate to Mick’s problem. The way he worries about his family and friends more than he does about himself.

Meanwhile Linda’s problems with alcohol will continue during the 35th Anniversary celebration, which will see Mick and Linda winning the “Pub of the Year” contest. This leads to a huge party on a luxury boat on the River Thames, where Linda’s problem is sure to raise its ugly head yet again. Meanwhile, Mick will continue to try and tell her exactly how he is feeling, as she continues to spiral out of control.

Keep watching “EastEnders” on BBC One to find out what happens to Mick and Linda next.