General Hospital Spoilers and Recap Friday, January 17 – Taggert Is Back In Port Charles; Nelle Demands To Take Care Of Wiley 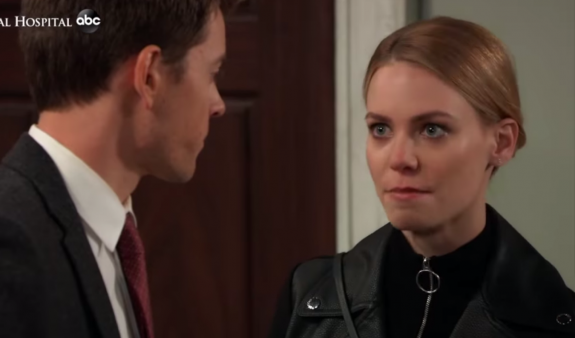 Gladys Corbin (Bonnie Burroughs) comes downstairs and greets Dev Corbin (Ashton Arbab) and the rest of the family. Sonny Corinthos (Maurice Benard) comes in and greets Gladys. Sonny tells Dev he is heading to New York for a few days. Dev gets a text and then rethinks the kiss with Jocelyn Jacks (Eden McCoy). Jocelyn thinks about their kiss as well. Jocelyn excuses herself to get ready.

Dev offers to go with Sonny. Sonny tells Dev he is taking Jason with him. Dev is ready to leave for school, Gladys offers to drive him. Gladys and Dev leave and Carly asks what is going on. Carly asks if Dev hit on Jocelyn. Carly asks if Jocelyn hit on Dev. Carly explains that it’s ok for Jocelyn to move on. Carly tells Jocelyn she’s not hiding from what happened with Dev. Jocelyn says she’s not ready to be thinking about other guys. Carly tries to explain that Jocelyn can love more than one person.

General Hospital’s Marcus Taggert (Real Andrews) arrives at Turning Woods to talk to Mike Corbin (Max Gail). Taggert asks Mike if he still likes the cards. Mike asks if Taggert is his ride. Sonny arrives to pick up Mike and finds Taggert with him. Sonny greets Taggert who says Mike and I were just talking about you. Sonny demands to know why Taggert is there harassing a defenseless old man. Jason Morgan (Steve Burton) arrives. Sonny asks Jason to sit with Mike awhile. Mike wants Jason to check on his wife, he can’t find her.

Jason asks if Mike is ready for his trip. Sonny demands to know why Taggert is back. Jason distracts Mike by playing music for him. Taggert talks about Laura Webber (Genie Frances) being mayor. Sonny believes Taggert needs to be in a warmer climate. Taggert says when someone puts something over on Sonny it’s big news to his circle of friends. Mike talks to Jason about Tony Bennett. Mike doesn’t want to leave. Jason suggest they stop by the Appollo theater. Sonny thanks Jason for his help. Mike wants to stop by Luigi’s. Sonny has a feeling they will see Taggert again.

General Hospital Spoilers: Michael Wants Sasha To Move In With Him

Michael wants Sasha to move in with him to keep her safe. Sasha is flattered the Michael wants to protect her. Sasha isn’t going to risk moving in together before they are ready. Sasha thinks Tracy Quartermaine is obnoxious. Michael doesn’t want to mess things up either. Michael suggests they take a vacation, Sasha says she can’t.

General Hospital’s Nelle tells Brad Cooper (Parry Shen) she has a lot of people to catch up with. Brad gives Nelle money and tries to get her out of the house before Willow Tait (Katelyn MacMullen) arrives to babysit. Nelle comes out of the shower and both wonder why the other is there. Willow goes off on Brad when she finds out Nelle is staying there. Brad says he couldn’t leave Nelle on the street. Willow tells Brad about the conversation last night. Brad disagrees with Willow. Brad tells Willow that Wiley misses Lucas Jones (Ryan Carnes). Brad goes to get Wiley and take him to the hospital daycare center.

Nelle tells Willow that being Wiley’s nanny could be bad for her health. Willow calls Nelle out on threatening her. Nelle says it must be hard on Willow to stay with the child she gave up. Nelle says she will let Brad know she left. Willow tells her to let Brad know she will call him. Nelle screams for Brad. Nelle demands that Brad gets rid of Willow or she will. Nelle is determined to take care of Wiley herself. Willow tells Michael that Wiley is no longer safe with Brad.

General Hospital’s Harrison Chase (Josh Swickard) is talking to Jordan Ashford (Briana Nicole Henry) who seems distracted. Chase asks if Jordan needs his help with anything. Jordan orders Chase to stay away from Nelle. Chase tells Jordan he’s not about to let Nelle hurt someone else.

Jordan agrees that Nelle is dangerous but he won’t be the one doing it. Jordan says Nelle’s attorney will claim bias if he is involved. Chase vows to protect the people he loves. Willow tells Chase that Brad has Nelle staying with him. Taggert arrives to speak to Jordan. Taggert is a former partner of Jordan’s.