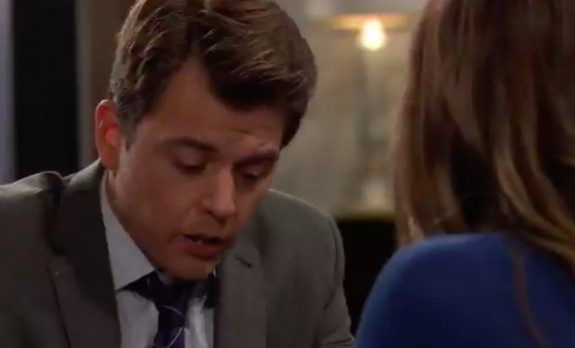 General Hospital’s Michael Corinthos (Chad Duell) has sworn to do what is best for Wiley Cooper-Jones (Theo And Erik Olson) as his godfather. Lucas Jones (Ryan Carnes) is in a coma and cannot take care of his son. Will Brad Cooper’s (Parry Shen) bad decision cause Michael to sue for custody?

General Hospital’s Lucas hates Nelle Benson (Chloe Lanier) and doesn’t want her anywhere near his child. Brad’s decision to move Nelle into his house with Wiley is something Lucas would never agree to. Lucas would want his child out of that house as fast as possible if Nelle remained there.

Michael knows how Lucas feels and will do anything he can to protect Wiley. Michael will feel he has no other choice but to try and take his godson for his own protection, will he win?

General Hospital’s Julian Jerome (William DeVry) has already given Brad orders to cut the time that Wiley spends with any Corinthos. This means cutting Michael’s time with his godson and is something Michael will not stand for. Willow Tait (Katelyn MacMullen) will certainly tell Michael about Nelle being at the house unless Brad threatens to cut off her access to Wiley as well.

Once Michael finds out Nelle is there, there will be no stopping Michael from attempting to save Wiley. Brad knows that Lucas would not be ok with his family being cut out of Wiley’s life either, especially Michael. Does Michael have any hope of getting Wiley with Brad’s latest actions? Will Michael be forced to prove Brad as unfit to protect Wiley?

General Hospital Spoilers: #GH Looking To Recast A Doctor – Could It Be Lucas Jones? @celebratesoaps https://t.co/i0PxDT1FRg

General Hospital’s Nelle hates Willow and they will certainly clash over Wiley. Willow has no idea that her child died and believe she is actually bonding with him while helping Brad. Nelle knows that Brad has her son and will not be kept from him, especially by Willow. When Willow tries to keep Wiley away from Nelle, that could get very messy. Nelle is not going to let Willow control her child.

Nelle could very well tell Willow that Wiley is not her child and that her baby actually died. Will Nelle be the reason the truth about Wiley finally comes out? Will Nelle kidnap Wiley before Michael learns the truth? Could Nelle have Martin Grey (Michael E. Knight) to get custody of Wiley for her? Will Brad lose Wiley to Nelle before Lucas Jones (Ryan Carnes) wakes up from his coma? Will Michael ever get custody of his child or will Wiley’s father be proven to be someone else?