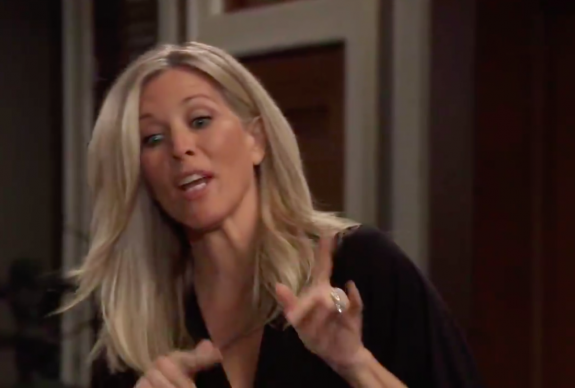 However, GH fans know why and it’s because Brad’s in too deep! He swapped babies with Nelle on that fateful night, so he’s doing his best to keep the peace. Nelle will demand to hold her son, which will put Brad in a bind. He won’t want to hand “Wiley” over, but he’ll feel like he has no choice.

When Michael shows up and sees Nelle cuddling “Wiley,” he’ll fly off the handle. Michael will wonder what in the world Brad thinks he’s doing. While Michael rages, Spencer Cassadine (Nicolas Bechtel) will do the same. Nikolas Cassadine (Marcus Coloma) will meet with Spencer in France, but this reunion won’t go as well as he hoped.

It appears Ava Jerome (Maura West) will try to help Nik and Spencer find common ground, but it won’t be easy. GH spoilers say Spencer will have plenty of questions for Nikolas. He’ll want to know where his father’s been and why he’s stayed away for so long. Spencer will be furious with Nikolas for not coming clean from the get-go. He’ll bring up some great points about the unreasonable flaws in Nik’s scheme.

As for Laura Collins (Genie Francis), she’ll get an apology from Jasper “Jax” Jacks (Ingo Rademacher) back in Port Charles. Jax will be sorry for his part in the deception, but Laura won’t hold it against him. She’ll insist Jax isn’t the one who broke her heart. Nikolas did that all on his own, so she’ll keep struggling to forgive Nik and move past what he’s done.

GH Spoilers: Curtis Ashford Will Catch Up With Nina Reeves

Other General Hospital spoilers say Curtis Ashford (Donnell Turner) will catch up with Nina Reeves (Cynthia Watros). She’ll admit she’s concerned about Charlotte Cassadine (Scarlett Fernandez), who keeps asking if Nina’s talked to her father. Curtis will suggest he’d like to know that, too.

Nina probably hasn’t reached out to Valentin Cassadine (James Patrick Stuart) since his arrest, but he’s definitely been on her mind. This is a big mess that’s only going to get messier! Speaking of messes, Jordan Ashford (Briana Nicole Henry) could use Marcus Taggert’s (Real Andrews) help with one. He’ll ask why he had to drop everything and come to Port Charles, so Jordan will explain her reasons.

Taggert will be pitching in on the Bob Massicotte investigation, but he’ll remain curious about Sonny Corinthos’ (Maurice Benard) growing problems as well. General Hospital spoilers say some hot drama’s ahead, so don’t miss what’s in store. We’ll keep you posted as other GH details emerge. Stay tuned to the ABC soap and don’t forget to check back often for the latest General Hospital spoilers, updates and news.