General Hospital Spoilers: Nelle Faces Off With The Quartermaines 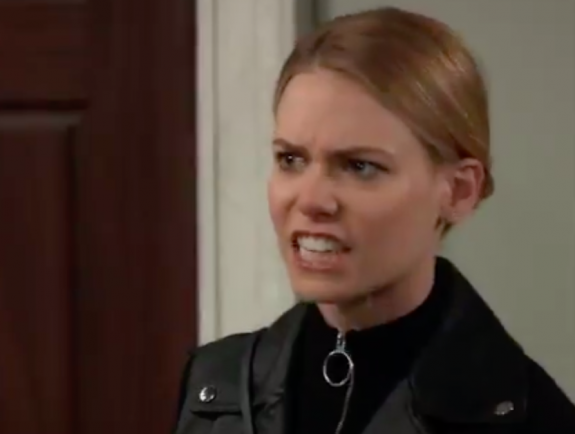 On “General Hospital,” it was recently revealed that Nelle Benson (Chloe Lanier) married Shiloh Archer (Coby Ryan McLaughlin) before he died. She made the shocking revelation at the latter’s memorial service. Now, she’s keeping herself busy by staking a claim on Shiloh’s ELQ shares, which won’t sit well with the Quartermaines.

As the word goes around about her marriage to Shiloh, Nelle, along with Martin Grey (Michael E. Knight), decided to crash the ELQ stakeholders meeting at the Quartermaine mansion. Martin recently informed Nelle that Oscar Nero Quartermaine’s (Garren Stitt) shares belong to her as Shiloh’s widow and they’ve obtained an injunction that says she can vote until the dispute over their ownership has been settled.

Tracy Quartermaine (Jane Elliot) sought out the help of her lawyer but to no avail. At this point, the law is on Nelle’s side. As Martin and the ELQ lawyer leave the meeting to give the stockholders some privacy, Michael Corinthos (Chad Duell) was brazen enough to offer Nelle money to go away. However, Nelle didn’t accept and said she won’t go anywhere.

Brook Lynn Quartermaine (Amanda Setton) warned Nelle that her greed will be her downfall. Sooner or later, she’ll end up with nothing and the only place for her is Pentonville. Nelle stormed out of the room and Michael promised the rest of the Quartermaines to do everything he can to get rid of Nelle.

It seems like Nelle will find trouble somewhere else aside from the Quartermaines. “General Hospital” spoilers hint that she’ll also get head to head with Willow Tait (Katelyn MacMullen).

Willow will show up in Brad Cooper (Parry Shen) apartment to stay with Wiley (Erik and Theo Olson) as he goes to work. Viewers may recall that he hired her as his nanny. Unfortunately, Willow will be finding someone else aside from Wiley. She won’t be happy when she sees Nelle appears on the doorway and the later feels the same way, too.

Brad will be torn especially when Nelle announces that she wants to stay with him and Wiley. Can he trust Nelle alone with the child? Nelle has caused so much drama ever since she got released from Pentonville. But she’s not yet done! She’s bound to destroy more lives as long as she’s still in Port Charles.