The Bold and the Beautiful Spoilers: Monday, January 20 – Quinn Vows To Make Brooke Pay – Sally Makes It Difficult For Wyatt To End Their Engagement 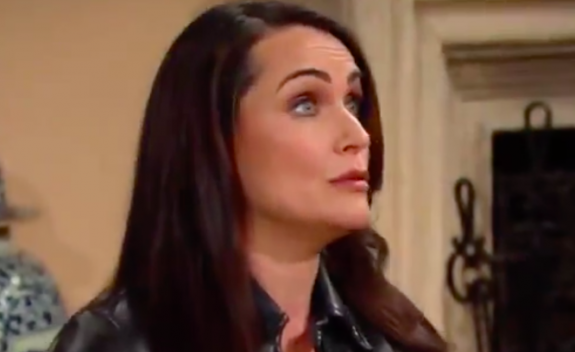 The Bold and the Beautiful spoilers for Monday, January 20, tease that Eric Forrester (John McCook) will find himself in the middle of a difficult situation. As B&B viewers know, he walked in on a major altercation between Brooke Forrester (Katherine Kelly Lang), Quinn Forrester (Rena Sofer), and Shauna Fulton (Denise Richards) and now he’s faced with both Brooke and Quinn making demands of him.

Specifically, Brooke has just insisted that Eric kick both Shauna and Quinn out of his mansion and out of his life. That’s quite the demand, and it’s surely going to rub Quinn the wrong way. It certainly doesn’t look like Eric is going to kick his wife to the curb just because that’s what Brooke wants, but it does seem that he may want to take some time to think about how to deal with the problem at hand.

Ongoing B&B spoilers indicate that Eric will eventually insist that Shauna leave the mansion. He’ll apparently decide that he doesn’t like what’s been going on between Shauna and Ridge Forrester (Thorsten Kaye) and he won’t want them living together under the same roof. Well, that’s not going to sit well with Quinn, and she’ll thoroughly disagree with Eric’s decision, but there’s not going to be much that she can do about it.

At any rate, on Monday’s B&B episode, Quinn will vow that Brooke won’t get away with meddling in her marriage to Eric. Of course, from Quinn’s perspective, Brooke just barged in her house and started hurling insults and accusations against her. Quinn won’t go for that, and it appears that she’ll soon devise a plan to go after Brooke.

Meanwhile, on Monday’s new episode of B&B, Wyatt Spencer (Darin Brooks) will be in a very difficult situation. As B&B viewers know, Sally Spectra (Courtney Hope) just summoned him to Forrester Creations for a meeting, then emerged wearing lingerie, hoping for an intimate scene.

But Wyatt actually come to see Sally with the intention of breaking off their engagement and ending their relationship for good. He recently decided that he wanted to be with Flo Fulton (Katrina Bowden) and that he never stopped loving her. Of course, Sally standing there in lingerie isn’t going to make his task easy!

On Monday’s episode of the Bold and the Beautiful, Wyatt will have to dash Sally’s dreams and tell her that he doesn’t want to see her anymore, and Sally is going to be devastated. Of course, since Wyatt and Sally haven’t been spending much time together, Wyatt doesn’t know about the difficulties that Sally has been having lately.

As B&B viewers know, Sally has been having serious problems at work and is likely on the verge of losing her position at Forrester Creations. And those problems she’s been having seem to be precipitated by her health problems. She doesn’t seem to know what’s wrong with her, but she’s been shaky and distracted.

Bold And The Beautiful Spoilers: Sally Spectra’s Problems Are Only Beginning

And what all of this means is that Wyatt’s going to dump Sally when she’s got some other very difficult situations going on. So it looks like Sally will have to deal with not only her breakup with Wyatt, but also with a serious health crisis as well as a possible career loss. It should be pretty difficult for her to take.

At any rate, on Monday’s B&B episode, it seems that Sally will make it pretty difficult for Wyatt to break up with her. Sally’s really in love with Wyatt, and it’s not going to be easy for her to realize that things are truly over. Look for some difficult scenes on Monday’s episode, as Wyatt is forced to tell Sally in no uncertain terms that it’s over.