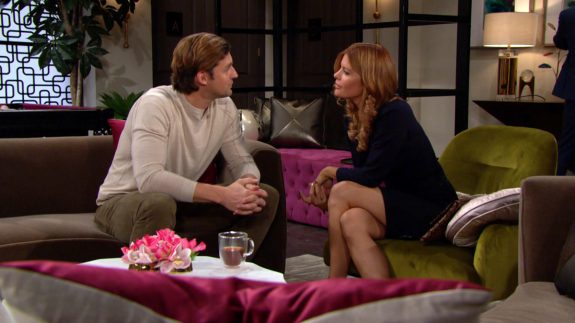 The Young and the Restless (Y&R) spoilers for Monday, January 20, tease that Phyllis Summers (Michelle Stafford) will see Abby Newman (Melissa Ordway) dressed up and ready for her date with Chance Chancellor (Donny Boaz) at the Grand Phoenix. Soon, Chance will arrive, and Phyllis will taunt them. They’ll head out for their date but return shortly as their reservations were canceled. Phyllis will bug them, and after she leaves, Abby and Chance will enjoy their time together.

The Young and the Restless Spoilers: Will Kyle And Summer’s Business Trip Lead To An Affair?

Summer and Lola will brainstorm when the electricity goes out in the kitchen, and they’ll decide to bring in Lola’s food truck for backup. Meanwhile, Theo and Kyle will bicker in typical fashion as Jill Abbott (Jess Walton) arrives. She’ll get acquainted with Theo, and the two will hit it off. Later, Kyle will notice Theo going to the kitchen, and he’ll follow.

In the kitchen, Theo will tell Lola that she’s an amazing woman, prompting Kyle to punch Theo. Lola will be horrified and wonder what’s wrong with Kyle. Theo will leave and Kyle and Lola will remain in the kitchen where they’ll argue over the same old Theo issues. Kyle will think that Theo is playing Lola and she’s not discouraging him. Kyle will ultimately leave. Meanwhile, Theo and Summer will talk about Kyle’s blowup, with Theo saying that Kyle lost it for no reason.

Next on Y&R, Rey Rosales (Jordi Vilasuso) will do his best to take care of Sharon Newman (Sharon Case) at her place. They’ll have popcorn and play cards, and it will help distract Sharon for a while, but then her mind will start working overtime, so Rey will leave to get Faith Newman (Alyvia Alyn Lind) to make Sharon feel better.

Meanwhile, Mariah Copeland (Camryn Grimes) will get a huge surprise when she learns she’s getting a special delivery, and it turns out to be Tessa Porter (Cait Fairbanks). Tessa will show up at the apartment to surprise Mariah, who will be thrilled. The two will make love, then Mariah will allude to something serious going on in her life but she’ll say that she isn’t sure that it’s her story to tell right now.

‘The Young and the Restless’ Spoilers: Phyllis Pushing Her Luck – Chance Being Harassed https://t.co/3C6C4agbtU pic.twitter.com/z1pVO5S9IR

They’ll decide to talk about it when Tessa comes home the next time. Tessa won’t be sure when she’ll be able to get away again, which will leave Mariah pensive. Soon, it will be time for Tessa to leave again, and they’ll say goodbye all over again.

Next on Y&R, at Crimson Lights, Chance and Abby will stop in for coffee and the two will dance to the music of the jukebox. They’ll then head back to the Grand Phoenix, to Chance’s room for a drink. Of course, Phyllis will spot them as they’re getting on the elevator. After the fire alarm goes off, they’ll all be back down in the lobby.

Chance will say that if someone pulled the alarm, then that person would wind up with blue dye on them – that’s how the security system works. Phyllis will “sincerely” hope that Chance and Abby’s night wasn’t ruined. Finally, on Monday’s new episode of Y&R, once she’s alone, Phyllis will reveal a pair of gloves covered with blue dye from her robe pocket.