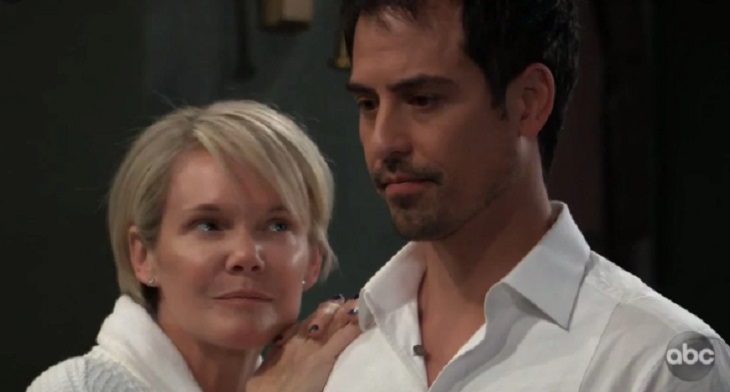 General Hospital (GH) spoilers tease that Ava Jerome (Maura West) and Nikolas Cassadine’s (Marcus Coloma) marriage is going to be anything but boring. But once all is said and done, will they find true love or will they become lifelong enemies? There is a fine line between love and hate.

General Hospital Spoilers: There is an attraction there

When Nikolas and Ava first met, there was an undeniable attraction there. They were just getting to know each other before Nikolas was shot right in front on her and presumed dead after falling out of a window. But before that happened, they shared at least one passionate kiss. There is no telling how their relationship might have progressed have Valentin Cassadine (James Patrick Stuart) not shot Nikolas.

But before Nikolas revealed himself he haunted Ava, by pretending to be a spirit. He told her that he was suffering in the afterlife and that Ava’s daughter, Kiki Jerome (Hayley Erin) was suffering right beside him. His cruel treatment of Ava stems from the fact that testified that Valentin shot Nikolas in self-defense.

“If you want to be a Quartermaine, you have to start thinking like one.” #GH pic.twitter.com/F2Oz4i3bbA

Ava regained her senses, and found the codicil that Nikolas was looking for and agreed to give it to him… for a price. And that price was a wedding. So now the two of them are married and sharing a home, although Ava seemingly has no idea that Nikolas is already married to Hayden Barnes (Rebecca Budig). Being in such close proximity for such an extended period will either draw them closer together, and fuel their hatred. With such volatile personalities involved, it really could go either way.

Will Ava and Nikolas fall madly in love? Or will they want to kill each other by the time it’s all said and done. Some passionate scenes are coming up, so stay tuned to General Hospital airing weekdays on ABC. And don’t forget to check back here regularly for all your General Hospital news, information and spoilers!