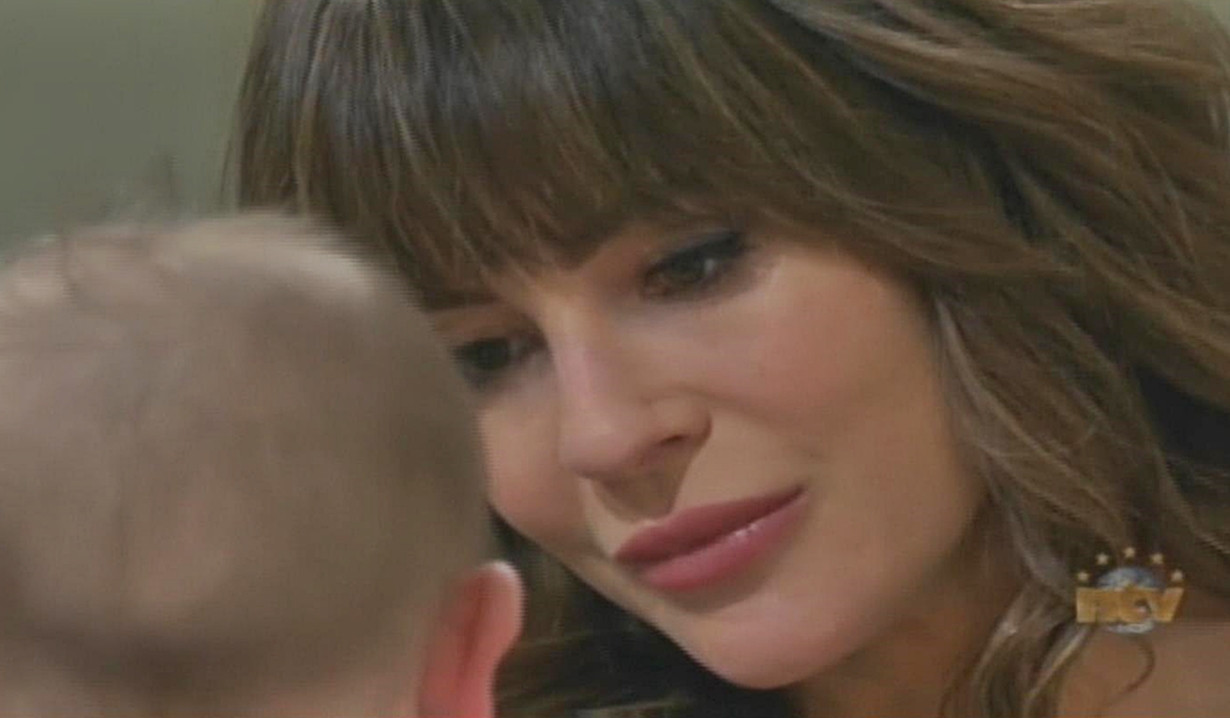 Days of Our Lives spoilers from Monday, January 20 through Friday, January 24 tease another week of exciting drama, suspense, and unfolding mysteries as this is flashback week, when fans will find out the backstories of many things that happened during the one year jump that started in November! Also please bear in mind that in the United States, beginning Tuesday, your program may be interrupted by the President Donald J. Trump senate impeachment trial. It is likely that Days of Our Lives will be shown online at nbc.com after 8:00 pm, as during the congressional hearings, or on Cozi-tv if you have the channel. Keep checking Days of Our Lives spoilers for updates.

Days of Our Lives Weekly Preview: All Of Your Time Jump Questions Answered

This week all your time jump questions are about to be answered, it’s the week of Days that you must see—buckle up! JJ Deveraux (Casey Moss) lays his head on his dead girlfriend, Haley Chen’s (Thia Megia) body and weeps, Adrienne Kiriakis (Judi Evans) is pronounced dead and a sheet is pulled up over her head; Kristen DiMera (Stacy Haiduk) lies in a hospital bed screaming, in labor, then wants to know where her baby is; Will Horton (Chandler Massey) cries as he tells Sonny Kiriakis (Freddie Smith) he’s responsible for his mother’s death; Maggie Kiriakis, (Suzanne Rogers) shocked, puts her hands over her face; Kristen gasps and puts her hands over her face, likely as she realizes she’s pushed Haley down a flight of chairs; then some flashbacks to Sarah Horton (Linsey Godfrey) on her cell phone to the hospital as Adrienne drives, calling ahead to let them know she’s in labor; Kristen pushing Haley down the stairs; Victor Kiriakis (John Aniston) holding the hand of an unconscious or sleeping Maggie in their bed; Abigail DiMera (Kate Mansi) finding Haley at the bottom of the stairs; Brady Black (Eric Martsolf) in shock as he turns his head; Sonny cries; a pink newborn baby bundled in a blanket followed by Xander Kiriakis (Paul Telfer) sneaking off with the baby; Adrienne honks and tries to stop the car as Will approaches in his car, and looks away from the road for a split second to look at his cell phone, and then a crash with shattered windshield!

Into LaborMonday, Sonny and Justin Kiriakis (Wally Kurth) revisit the last day of Adrienne ‘s life, which was on the past Mother’s Day, in a terrible irony. The day started off with Sonny, Justin, and Sonny’s husband, Will) and Adrienne all together, celebrating Mother’s Day, ending in tragedy, which will play out all during rest of the week. Sarah goes into labor; Adrienne drives her to Salem University Hospital, with Maggie and Xander apparently being otherwise occupied when they have to head out. Also on Monday, Sonny has a surprising proposal for Will, and Brady causes tension when he brings Kristen to his parents’ townhouse.

Tuesday, tragedy strikes Sarah and Adrienne as they are on their way to Salem University Hospital as Sarah is in labor! A car, possibly two cars, come out of nowhere and crash into the car, which Adrienne is driving; Adrienne’s injuries are very severe, possibly a brain injury; Sarah remains trapped in the car in labor! Also, her mother, Maggie is upset by a face from the past; it’s Summer Townsend, (Marie Wilson) the baby girl she gave away years ago! She hasn’t been in Salem for years – what could she want? Also on Tuesday, Tony DiMera (Thaao Penghlis) learns that his Anna DiMera (Leann Hunley) has betrayed him, and Xander makes an admission to Victor.

Wednesday, Brady and Kristen have arrived at Salem University Hospital, she’s in the birthing room, and as she prepares to give birth, a complication arises; the umbilical cord is wrapped around the baby’s neck! Brady tells Kristen to PUSH! Meanwhile, Xander, likely having heard that Sarah is in labor and on the way to the hospital himself, comes across the wreck with an unconscious Adrienne and Sarah in the car; she helps her deliver a baby girl and they head for the hospital!

Sarah apparently already knew there was no help for Adrienne, or as a doctor, she would have done what she could, labor or not! Also on Wednesday, Will comes along also and finds Adrienne and Sarah in their precarious situation, and later after everyone is at the hospital, Dr. Kayla Johnson (Mary Beth Evans) relays heartbreaking news to Justin. Orpheus (George DelHoyo) also appears in this episode.

DecisionThursday, Kristen’s entire world is shattered as after holding her live, seemingly healthy baby girl she has waited for so long, Haley comes in and tells Brady and Kristen their doctor needs to speak to them; the news is devastating and Kristen’s entire world is shattered when they are told that the baby died! That is because Victor and Xander made a fateful decision – it was really Sarah’s baby that died shortly after they all got to the hospital, and Victor told Xander to switch Kristen’s baby with Sarah’s! Also on Thursday, a guilt-ridden Will confides in JJ) and Justin informs Sonny that Adrienne has died.

Friday, Brady is stunned to learn what Kristen has done; in shock at hearing her baby girl is dead, she ran out of the room, and shoved Haley out of her way not realizing Haley was at the top of a flight of stairs, down which she tumbled to her death! Meanwhile, Abigail has to tell JJ that Haley is dead, which puts him into a world of devastation that turns into rage! Also on Friday, Will confesses to Sonny and Justin, thinking he was the reason for Adrienne’s death, and Jack Deveraux (Matthew Ashford) tearfully says goodbye to Adrienne.That’s all for this week’s Days of Our Lives weekly spoilers. Stay tuned to the show, and keep checking Days of Our Lives spoilers frequently for all the latest news, updates and developments!