Days Of Our Lives Spoilers: Will Goes Free, But Will He Be Able To Save Sonny From A Dangerous Evan? 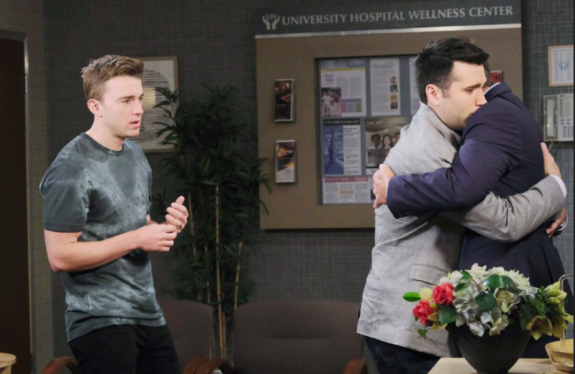 Days of Our Lives (DOOL) spoilers tease that Will Horton (Chandler Massey) may soon be going home. Recently, Xander Cook (Paul Tefler) and Victor Kiriakis (John Aniston) revealed to a shocked Ciara Brady (Victoria Konefal) that Will isn’t responsible for killing Adrienne Kiriakis (Judi Evans). It shouldn’t be all that long before Will gets to go home, but will it be too late?

Will convinced Sonny Kiriakis (Freddie Smith) to sign divorce papers because he wanted to let Sonny go to live his life and not have to be tied to the man who killed his mother. But now that Will knows he didn’t kill Adrienne, things are different. Look for Will to do everything he can to win Sonny back! It’s a good thing, because Evan Frears (Brock Kelly) might be more than just a romantic rival.

Days of Our Lives Spoilers: Is Gabi Leaving DOOL?

For the past year, Evan has been working as Rafe Hernandez’s(Galen Gerring) many, helping to take care of baby David. But it seems more and more likely that Evan is David’s father, and that he killed Jordan Ridgeway (Chrishell Stause) in revenge for keeping David from him. If that’s truly is the case, than Evan poses a huge threat to Sonny.

Days Of Our Lives Spoilers: Will Horton Out Of Jail

Once out of prison, look for Will to make every effort to get Sonny away from Evan. And once the truth comes out, it may be a race against time to get to Sonny before Evan makes him his next victim. Spoilers indicate that the true killer will eventually be caught, but let’s hope he doesn’t kill Sonny first!

Is Will about to go free? Did Evan kill Jordan? Is he going after Sonny next? Only time will tell, so stay tuned to Days of Our Lives airing weekdays on NBC. And don’t forget to check back here regularly for all your Days of Our Lives news, information and spoilers!