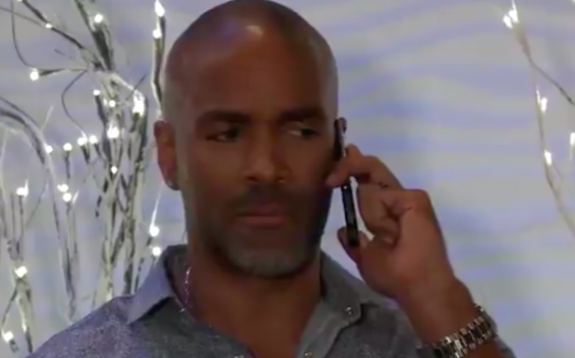 General Hospital spoilers tease that Curtis Ashford (Donnell Turner) will check in on his friend Nina Reeves (Cynthia Watros) in an upcoming episode of GH to make sure she’s okay!

GH Spoilers: Nina Reeves Has Been Through A Rough Couple Of Weeks

There’s no doubt that Nina Reeves (Cynthia Watros) has been through a rough couple of weeks after she dumped Valentin Cassadine (James Patrick Stuart) at the altar and told him off – actually she didn’t even have to say “I don’t” because their wedding was interrupted by Nikolas Cassadine (Marcus Coloma) carrying in a soaking wet Ava Jerome (Maura West) who he had just saved from drowning, after Valentin pushed her over the parapet of Wyndemere Castle!

Then Valentin had tried to take off with Charlotte Cassadine (Scarlett Fernandez) and go on the run, but were stopped by the Port Charles Police and Commissioner Jordan Ashford (Briana Nicole Henry) herself, who had been an invited guest and arrested him and took him off to jail! However, Nina was able to spend some time with Charlotte along with Laura Collins (Genie Francis) and Lulu so all three women were supporting the frightened little girl.

Nina went right back to work at Crimson, barely taking a breath or skipping a beat before throwing herself into her work, although Maxie Jones (Kirsten Storms) and Jasper Jacks (Ingo Rademacher) told her it might be better for her to take a little time off. She claimed she was fine and she needed to get back to work, although her friends could tell that she was pretty stressed.

Curtis has been busy dealing with Jordan and her preoccupation with the Bob Massicotte (Randy J. Goodwin) case, which he did a little looking into for her. However, Jordan’s become so preoccupied that he even called his auntie Stella Henry (Vernee Watson) for some relationship advice, because Jordan, although she welcomed his intel doesn’t seem to want to open up to him about why it bothers her so badly that he was said to have overdosed!

GH Spoilers: Curtis Ashford Makes The Time To Check In On Nina Reeves

Curtis finally makes the time to check in on Nina when he realizes that he hasn’t seen her since New Year’s Eve, which is when her wedding night was and Valentin was arrested. She planned to dump him but with dumping him she also lost rights to Charlotte, since she can’t even be considered her stepmother now since she’s no longer married to her father.

Nina still loves Valentin in spite of all that had happened, and she can’t just turn off her feelings for him like a faucet! Jax had warned her that she may regret her actions but she didn’t listen and went through with her plan anyway and when one looks closely the pain can be seen on Nina’s face and in her eyes. Curtis notices too, and lets her know that he is there if she needs him!