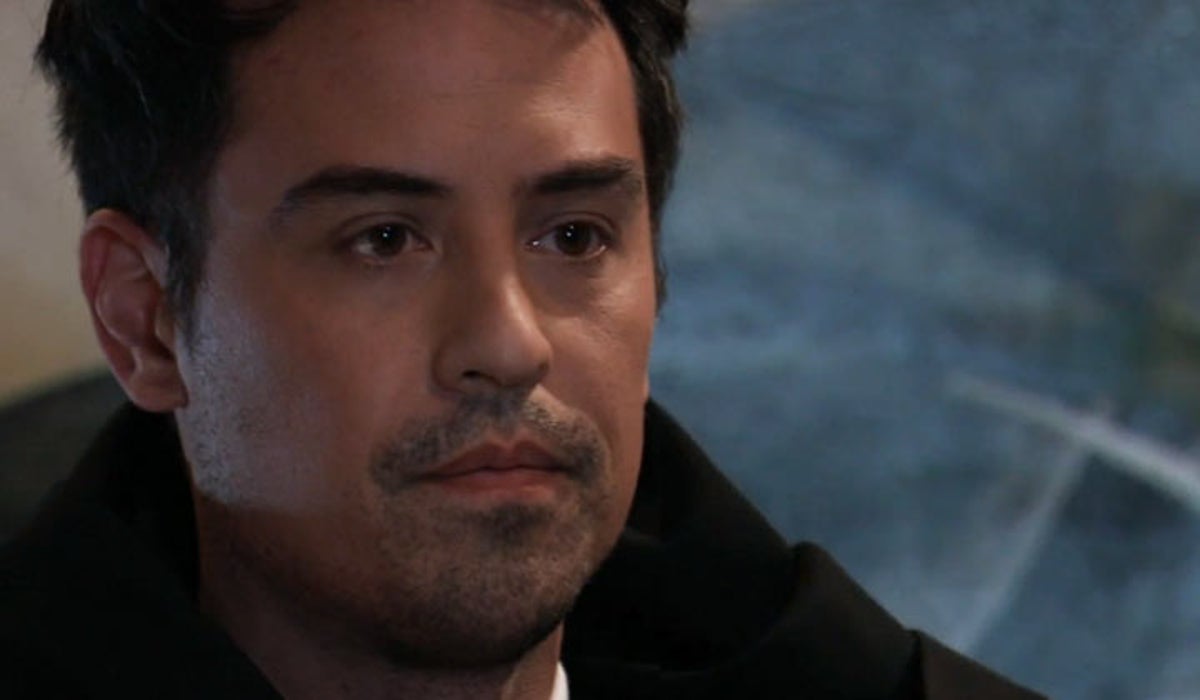 Nikolas Cassadine (Marcus Coloma) flies to France along with his new wife-on-paper-only, Ava Jerome Cassadine (Maura West) to tell his son Spencer Cassadine (Nicolas J. Bechtel) in person that he is alive. Nikolas would probably have done better to make up a story about his escaping from captivity than to tell the truth that he’s been alive and free for three and a half years without telling any family or friends including Spencer! Ava will try to soften the shock by talking to Spencer first, but he is very angry at Ava for “selling him out to his sinister uncle” for which she apologizes. Spencer vents about losing his inheritance, his home and his father, at which point Nikolas sneaks up from behind him, puts his hand on his shoulder and tells him he hasn’t lost his father!

Unfortunately, the family reunion with Spencer won’t go as Nikolas had hoped because of Spencer’s anger at him for being left out of the loop, in spite of Ava’s attempts to smooth things over between the two of them. Ava and Nikolas come to an agreement and he signs her prenup, but adds a condition of his own. Later in the week Nikolas goes to see his mother, Laura Collins (Genie Francis) to try to mend fences with her, but finds that his family members aren’t the only ones angry with him, as Dr. Hamilton Finn (Michael Easton) confronts Nikolas as to what happened to the mother of his daughter Violet Barnes (Jophielle Love), Hayden Barnes (Rebecca Budig) and later delivers an ultimatum!

Sonny Corinthos Prepares To Take Mike Corbin On A Trip

Sonny Corinthos (Maurice Benard) prepares to take Mike on a trip to New York, with Jason Morgan (Steve Burton) along to help. Sonny plans to take him to Manhattan to get him into the Alzheimer’s Disease treatment trial involving brain waves, which has had quite a bit of success, after Mike’s cousin Gladys Corbin (Bonnie Burroughs) had found an article about it online and printed it out for him.

Gladys of course is impressed that Sonny decided to use her information, but it sounds like things may not go as planned. Sonny will have to try to comfort Mike for some reason, and by the end of the week Sonny makes a trip to the emergency room! The emergency room visit may or may not be related to Mike, because Port Charles is only hours away from Manhattan and Brooklyn, where Sonny had also planned to take Mike to their old stomping grounds in the Bensonhurst neighborhood.

Commissioner Jordan Ashford (Briana Nicole Henry) will work on solving the Bob Massicotte (Randy J. Goodwin) case and also will have to deal with trouble in Port Charles. She has already called in former PCPD detective and apparently a former partner of hers, Marcus Taggert (Real Andrews) for help, likely on the Bob Massicotte case although there is the issue of Sonny’s coffee truck having been hijacked and then burned, in a no parking zone at that, which could be a calling card from a rival mob trying to move in on Sonny’s territory.

Sonny noted that if it’s a rival then they have no idea how he does business because Corinthos coffee is not a front! Jordan will have to rush to deal with an emergency and this could be related to possible new mob activity.

Nelle Benson Archer (Chloe Lanier) is out on parole and making trouble for nearly everyone in Port Charles! Willow Tait (Katelyn MacMullen) grows increasingly frustrated with both her and Brad Cooper, (Parry Shen) who Nelle has bullied into letting her move in with him and Wiley Cooper-Jones (Erik and Theodore Olson)! She feels like Wiley is no longer safe with Brad and she’s right! Michael Corinthos (Chad Duell) pays Brad a visit and finds Nelle holding Wiley! However, Nelle will be shook up by someone or something this week, and it takes a lot to shake up Nelle so that will be interesting for General Hospital fans to find out, and Michael later finds his sister Josslyn Jacks (Eden McCoy) on the docks – but why?

Michael also finds himself defending his girlfriend Sasha Gilmore (Sofia Mattsson) against someone, probably Nelle; however, Sasha is left shaken. Willow questions Brad’s bizarre behavior, and apparently Nelle and Brooke Lynn Quartermaine (Amanda Setton) tangle again as Nelle tries to appeal to Brooke Lynn’s senses! Jasper “Jax” Jacks calls Carly Corinthos (Laura Wright) about something, could this be related to Michael finding Joss on the docks and be Nelle related?

Valentin Cassadine (James Patrick Stuart) gets more trouble this week on General Hospital. He’s already in the PCPD jail awaiting trial, apparently not being able to get bond, and Attorney Martin Gray (Michael E. Knight) stays close to him. Lulu Spencer (Emme Rylan) comes to pick up Charlotte Cassadine (Scarlett Fernandez) who apparently has been staying with Nina Reeves (Cynthia Watros) since when Curtis Ashford (Donnell Turner) checks on her, she tells him that Charlotte has been asking a lot of questions about her father and missing him. Nina will be perplexed and later, Ava and Nina will be reactive as Valentin receives a court order, likely from Lulu, suing for full custody of Charlotte!

That’s all for this week’s Five Key Takeaways from General Hospital. Stay tuned to the show, and keep checking General Hospital spoilers for all the latest news, updates and developments!