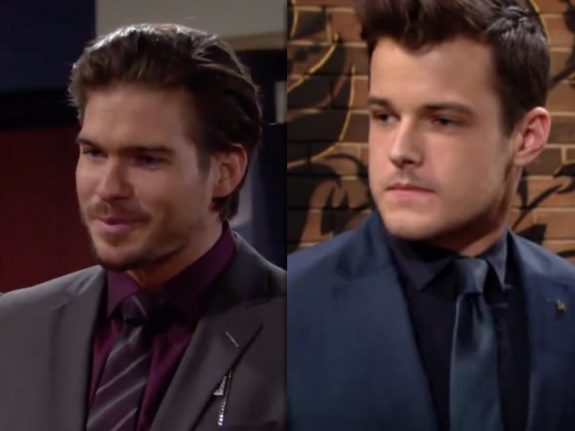 The Young and the Restless spoilers document that Kyle Abbott’s (Michael Mealor) inability to control his emotions is playing directly into Theo Vanderway’s (Tyler Johnson) hands. The newfound member of the Abbott family has subversively been furthering his plans to split Kola.

Summer Newman (Hunter King) recognizes reality, as does Mariah Copeland (Camryn Grimes). But neither half-sister has been able to prevent the rise in tensions among the guys.

Now, as a result of Kyle’s attack on Theo, Lola Abbott (Sasha Calle) will be impacted more directly than in the past. And with that comes the possibility that she and Theo will deepen a bond that has recently seemed to move beyond friendship.

The Young and the Restless Spoilers: Will Kyle And Summer’s Business Trip Lead To An Affair?

Young And The Restless Spoilers – Kyle Abbott’s Instincts Are Right

It’s not that Kyle has everything all wrong. He doesn’t. Theo has been trying to disrupt his personal and connected business life for many months.

Hitting the daytime jackpot, by having Jack Abbott (Peter Bergman) and Traci Abbott (Beth Maitland) discover that Theo wasn’t just a Vanderway, but also the grandson of Dina Mergeron (Marla Adams), revealed a blood tie to Kyle. That’s what pushed all of Lola’s husband’s buttons.

Young And The Restless Spoilers – Theo Vanderway Wants His Just Due

Theo didn’t initially intend to get Kyle. Johnson’s newer character came to town as part of Jabot’s social media outreach. Theo was an influencer agent and Kyle was an old pal from New York.

Kyle had a secret that Theo was linked to. But the buddies agreed to keep the past buried. Later, after various disagreements, Theo brought Zoe Hardisty (Anna Grace Barlow) to town in an attempt to disrupt Kola’s wedding. That crossed the line, then, after Kyle learned who Theo was, Mealor’s character stepped over it.

All Theo wants is to be treated fairly. Kyle can’t bring himself to forgive his cousin and so the family battle has continued to sizzle.

The Young and the Restless Spoilers: A New Crisis For Victoria And Billy, Can The Couple Survive https://t.co/eisREZYS5v pic.twitter.com/a3kNLgB1NV

Lola hasn’t gotten to the point where she’s fallen for Theo, though Kyle thinks she’s heading there. That’s really the issue, Theo is a legitimate threat to the adult life that Kyle wants to keep living.

Trying to stop Theo from pulling him back to the past hasn’t worked. Now, due to the punch, the peace Lola wants seems unlikely to be reached now, or in the near future. Unless this dynamic changes, Kola will remain endangered, which is exactly what Kyle thought was inevitable.