Days Of Our Lives Spoilers: Kayla Devastated But Coping – Can She Truly Move On With Justin? 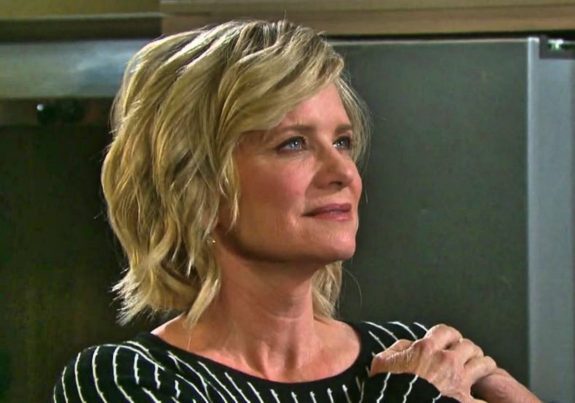 Days of Our Lives spoilers reveal Dr. Kayla Brady (Mary Beth Evans) was moving on with Justin Kiriakis (Wally Kurth). Then out of the blue, Steve “Patch” Johnson (Stephen Nichols) showed back up. However, he wasn’t the man she knew long ago. Can the doctor truly move on when the past invades the present?

DOOL spoilers confirm that Kayla decided to move on after Steve signed and returned the divorce papers. There wasn’t any discussion, questions or even an explanation. Despite this, the good doctor managed to find love again.

However, just as Justin and Kayla were taking the next step in their relationship, a familiar face popped up in Salem.

As fans saw during the New Year’s Eve episode, Hope Brady (Kristian Alfonso) aka Princess Gina brought a surprise guest to Julie Williams’ (Susan Seaforth Hayes) celebration. It was none other than Kayla’s former love, Steve and it caused quite a commotion. However, the person affected the most by Steve’s arrival was his ex-wife.

Days of Our Lives spoilers tease that Steve isn’t the same man that Kayla remembers. Of course, fans know it is because he has a brain chip that transformed him into Stefano DiMera. However, Kayla and most of Salem doesn’t realize this.

No matter what the reason for Steve’s personality change and cold demeanor, Kayla ended up hurt and devastated all over again. She didn’t even get the answers to her questions or a logical explanation.

Days of Our Lives Spoilers: Devastated But Coping

In the latest issue of Soap Opera Digest, actress Mary Beth Evans was asked about her character. How is Kayla coping with Steve’s return and can she really move on with Justin given the current circumstances? It seems that not only can she move on, but she plans on doing exactly that.

“It’s so painful and so horrible, but now it’s like, ‘Forget it. You’re not going to hurt me anymore. This is it. I’m going to stick with this solid good thing in Justin that I can trust.’”