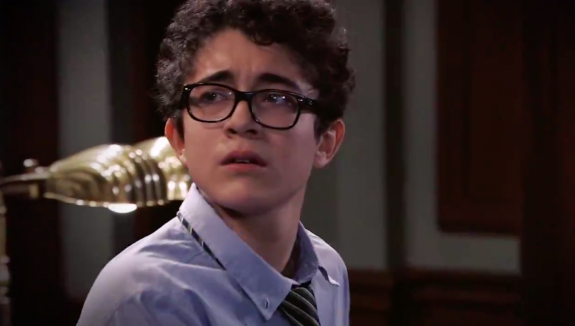 Nikolas Cassadine (Marcus Coloma) walks in. Nik gives Spencer the story of his return. Spencer needed his father to return. Spencer tries to fight for his inheritance himself. Spencer is furious that it was more important for Valentin Cassadine (James Patrick Stuart) to believe he was dead than for Spencer to know he was alive. Nik says it was hard to stay away from him.

General Hospital’s Jasper Jax (Ingo Rademacher) meets with Laura Webber (Genie Frances) who is visibly upset. Jax explains that Nik refused to let her tell him what was going on. Jax apologizes and Laura accepts. Laura wants Jax to join in the waterfront renovation. Gladys interrupts Jax and Laura to introduce herself. Carly ushers Gladys away to let Laura and Jax talk. Gladys wants to go by the warehouse. Carly wants Gladys to have a seat and wait for her to finish her business. Laura warns Jax not to work with Nik again.

Meanwhile, General Hospital’s Brad calls off work and tries to keep Nelle from holding Wiley. Nelle says she wants to hold her son. Brad hands Wiley Cooper Jones (Theo and Erik Olson) to Nelle who says he is right where he belongs. Willow tells them that Brad seems unable to stand up to Nelle. Michael and Chase head to Brad’s to get Wiley away from Nelle. Sasha Gilmore (Sofia Mattson) and Willow wait for them at the Metrocourt. Nelle tells Wiley she’s his mom. Michael and Chase arrive and Nelle answers the door with Wiley in her arms. Michael takes Wiley out of Nelle’s arms and gives him back to Brad.

Michael demands to know what Nelle’s angle is. Nelle says Brad is her only friend in town. Michael wants to know what it will take to keep Nelle away from Wiley. Nelle wants to become Wiley’s nanny. Michael has an offer Nelle will have a hard time refusing. Michael offers to make better accommodations for Nelle. Chase says social services could easily get involved with a report that Nelle is living there. Brad joins Michael and Chase after Nelle leaves. Brad tries to explain what happened. Brad says he hadn’t agreed to anything. Michael tells Brad he will not let him compound the problems with Lucas but putting Wiley at risk.

Curtis thinks this is a way to keep Sasha in her life. Curtis asks if any of Nina’s mother’s story was true. Nina says she will never find out the truth. Sasha wants Willow to tell her what Nelle is like. Sasha gets a text from Nina. Sasha leaves to go to see Nina, Willow offers to tag along. Curtis offers to search for the truth, Nina refuses. Sasha and Willow arrive. Nina has conditions, she wants an in-depth cover story on Sasha. Willow keeps Charlotte company while Sasha and Nina talk.

Sasha tells Nina to draw up the paperwork. Sasha says if this will make up for what she did, she in all in. Willow asks if Sasha is ok, she says it depends. Nelle runs into Willow and Sasha when they return to the Metrocourt. Jax speaks to Charlotte as Nina gets paperwork for him. Charlotte cuts up the Crimson cover as Nina is talking to Jax. Nelle says Michael asks her to move in. Michael needs to keep Nelle close until he is ready to drop the bomb on her.

General Hospital’s Marcus Taggert (Real Andrews) meets with Jordan Ashford (Briana Nichole Henry) and asks why she called him to Port Charles. Jordan gives Taggert a file to check out. Taggert says the is ridiculous. Taggert vows to check this out for Jordan. Laura arrives and speaks to Taggert. Taggert says he stopped by to see an old friend. Taggert leaves and Jordan tells her she and Taggert used to work together. Laura and Jordan discuss the waterfront. Taggert looks annoyed that Curtis is with Jordan.