General Hospital Spoilers: Are Chase And Brook Lynn Destined To Be A Couple? 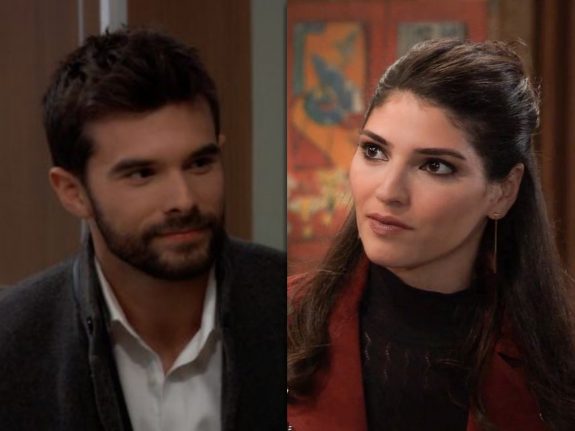 General Hospital (GH) spoilers tease that several Port Charles couples are going to be shaken up in 2020. And it looks like Hamilton Chase (Josh Swickard) and Brook Lynn Quartermaine (Amanda Setton) might just be a new couple in the making. If their first encounter is any indication, there may a lot of fireworks between the two.

During a brawl at the Floating Rib, Brook Lynn inadvertently hit Chase over the head with a beer bottle. This led the detective to place Brook Lynn under arrest. She certainly made an impression! Even back at the station, the two had a banter going that seemed like it could lead to something down the road. Whether they even noticed it, there definitely seemed like there was a chemistry between them.

Right now, Chase is very seriously involved with Willow Tait (Katelyn MacMullen). But that relationship seems to be doomed. Willow wants kids and Chase has indicated that if it happened, he’d be happy but he would much rather wait and enjoy this time without kids. And once the baby swap is revealed, Willow is likely to be devastated. She is already in Michael Corinthos’ orbit and the truth about Wiley Cooper-Jones (Erik and Theo Olsen) may just bring them even closer.

General Hospital Spoilers: If Willow Tait and Hamilton Chase Do

Break Up, What Happens?

If Willow and Chase end up apart after the truth comes out, Chase will need someone to fill that gap. He’ll likely not be looking for anything serious, at least not right away. Brook Lynn is also not at a place in her life where she is anywhere close to settling down. Brook Lynn should definitely keep Chase amused. And perhaps that will be exactly what he needs.

Will Willow and Chase break up after the baby swap is revealed? Will a heartbroken Chase enjoy Brook Lynn’s company, possibly leading to romance down the road? Only time will tell, so stay tuned to General Hospital airing weekdays on ABC. And don’t forget to check back here regularly for all your General Hospital news, information and spoilers!