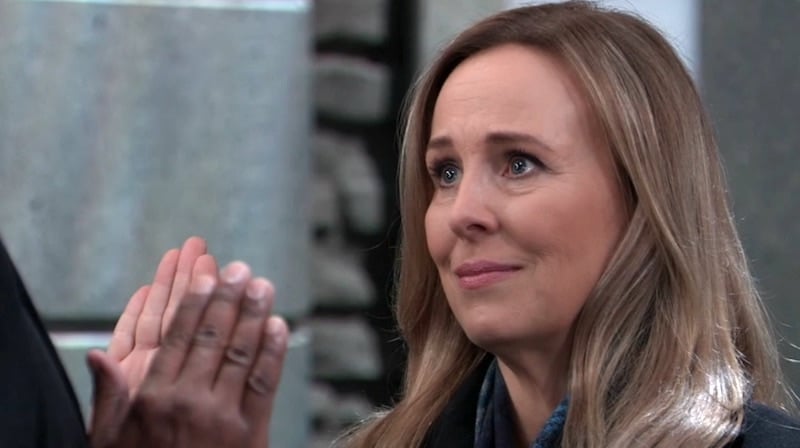 General Hospital spoilers tease that Laura Collins (Genie Francis) is setting her sights on a new project, the renovation of Port Charles’ waterfront in an upcoming episode of GH; will she approach Jasper “Jax” Jacks for funding?

Laura Collins Talked To Commissioner Jordan Ashford About The Project

General Hospital viewers will recall Laura went to the Port Charles Police Department to talk to Commissioner Jordan Ashford (Briana Nicole Henry) about her idea for the revitalization of the waterfront, and asked her about the crime statistics, which she needed for her meeting with a developer. Later, she went to the Quartermaine mansion where she talked to Tracy Quartermaine (Jane Elliot) and Ned Quartermaine (Wally Kurth) about her ideas. Laura asks if they would be interested in creating a private partnership for her revitalization project, and Ned reminded her that she had opposed the idea when it was a part of his own mayoral campaign platform. She said the difference from his ideas was that she planned to bring the community in the loop and the decisions that are to be made instead of just telling them what is going to happen, like Ned did.

Tracy and Ned both reminded Laura that the project may be a loss for those working on the wrong side of the law, Sonny Corinthos (Maurice Benard) for instance. Laura knows that makes it a touchy situation with Michael Corinthos (Chad Duell) and asked Ned for advice on approaching Michael. Tracy suggested Michael may not be in charge for long. At that point, both she and Ned had to head for the PCPD because both of their daughters had gotten involved in a bar fight!

The Quartermaines May No Longer Be A Funding Source

But the Quartermaines may no longer be a funding source, since they now will be embroiled in a fight with Nelle Benson Archer (Chloe Lanier) who with the help of Attorney Martin Gray (Michael E. Knight) produced an injunction allowing her to vote at the shareholder’s meeting for the ELQ shares that Oscar Nero Quartermaine (Garren Lake Stitt) bequeathed to Shiloh! They will be busy fighting her tooth and nail to keep their legacy, because Nelle won’t stop until she takes over the entire company if she possibly can! Laura may have to think of another funding source for her project, and that source may be Jax!

Sonny claims that his coffee business is not a front for mob activities or running guns or anything like that, and it may not be at this time, although as General Hospital viewers will recall, it has sometimes been in the past when Sonny was involved more in mob-related activities. He hasn’t done anything mob-related in over five years, and now his focus has been on his family and in particular his father, Mike Corbin (Max Gail) who is rapidiy heading into the final stages of Alzheimer’s disease. Still, Jax may be the perfect person to fund Laura’s project!