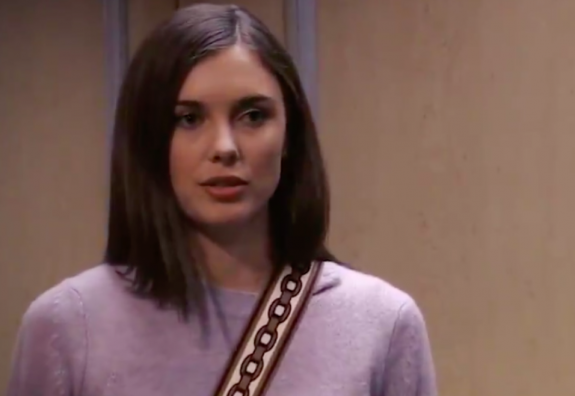 General Hospital (GH) spoilers for Tuesday, January 21, tease that Lulu Spencer (Emme Rylan) will have some questions. At Crimson, Lulu will arrive to pick up Charlotte Cassadine (Scarlett Fernandez) – who just took a pair of scissors and cut up a pic of Sasha Gilmore’s (Sofia Mattsson) face. When Lulu sees what Charlotte did, she’ll ask what happened and try to convince Charlotte to open up.

GH Spoilers: Lulu Spencer Will Have Some Questions

Charlotte may confess that she blames Sasha for wrecking everything. She might think Valentin Cassadine (James Patrick Stuart) and Nina Reeves (Cynthia Watros) would’ve been just fine if Sasha hadn’t deceived Nina. However, Lulu might point out that Sasha’s not entirely responsible. There are grownup issues that Charlotte isn’t able to understand yet.

Regardless, Lulu may advise against doing things like cutting up Sasha’s photo or plotting a pint-sized dose of vengeance. Speaking of vengeance, Sonny Corinthos (Maurice Benard) will apparently have a plan to retaliate against his enemy. He’ll whisper to Jason Morgan (Steve Burton) about how there can’t be an incident. Sonny will insist this has to work, so he’ll trust Jason to follow very specific orders.

General Hospital Spoilers: There Is A Lot Of Drama Surrounding Nelle Benson

General Hospital spoilers say a shocking shootout is coming up later in the week. It’ll bring plenty of danger, but let’s talk about the drama surrounding Nelle Benson Archer (Chloe Lanier) for now. Josslyn Jacks (Eden McCoy) will suggest something surprising down on the docks. She’ll tell Michael Corinthos (Chad Duell) that Willow Tait (Katelyn MacMullen) should revoke the adoption and take “Wiley Cooper-Jones” (Erik and Theo Olson) back.

Willow could consider the idea if Nelle keeps this up. General Hospital spoilers say Willow’s rage will grow stronger in Tuesday’s episode. She’ll talk to Sasha about this bizarre hold Nelle has on Brad Cooper (Parry Shen). Willow will wonder how she can let Brad raise her son on his own.

General Hospital Spoilers: Spencer And Nikolas Reunite- Will It Be Positive? https://t.co/hOG53ZCESF pic.twitter.com/G2hGFLRksx

Of course, GH fans know “Wiley” is actually Jonah Corinthos, which makes him Michael and Nelle’s son instead. Nelle obviously knows that as well, so she’ll enjoy her secret as she provokes Carly Corinthos (Laura Wright). All the Jonah mentions will become too much for Carly to take. Carly will dare Nelle to mention Jonah’s name one more time and see what happens!

While Carly threatens Nelle, Nikolas Cassadine (Marcus Coloma) will reach an agreement with Ava Jerome (Maura West). He’ll promise to sign the post-nup, but only if Ava honors one last condition. General Hospital spoilers say Ava will get on board, so we’ll see where this partnership goes from here.

It sounds like major excitement’s brewing in Port Charles. We’ll give you updates as other GH news and rumors emerge. Stick with the ABC soap and don’t forget to check back often for the latest General Hospital spoilers, updates and news.